Review -- About That Night 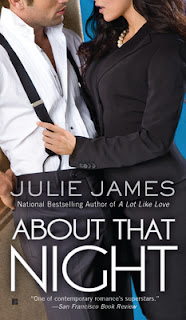 Fresh off her first year of grad school, law student Rylann Pierce is celebrating at the campus bar with her friends when she meets an extremely handsome guy whom she instantly nicknames “Smug Dimples”.

He looked her over with assessing eyes. “Let me guess. You’re graduating this weekend. You just took your last exam and tonight you’re celebrating your entry into the real world.” He cocked his head. “I’d say...advertising major. You scored a job with Leo Burnett and are about to move into your first apartment in Chicago, a quaint overpriced two bedroom in Wrigleyville that you’ll share with your roommate over there.” He nodded his head in the direction of Rae, obviously having noticed which table Rylann had been sitting at.

She rested her arm on the bar. “Is this ‘guess my major’ routine your typical opening line, or something you break out only on graduation weekend, hoping most women are too drunk to notice how generic it is?”

He looked offended. “Generic? I was going for confident and perceptive.”

“You ended up somewhere around clichéd and smug.”

Once Rylann gets back to her table, her roommate, Rae, tells her that Smug Dimples is billionaire heir Kyle Rhodes. Rylann shrugs it off as no big deal. Later, Rae and their friends “ditch” Rylann so that Kyle will walk her home. During that walk Rylann discovers that Kyle isn’t a spoiled rich kid; he is charming, respectful, and ridiculously intelligent. Their attraction is evident and she agrees to go out on a date the next day. But Kyle never showed up.

Nine years later, Kyle and Rylann meet again—this time in a courtroom. Rylann, an Assistant U.S. Attorney, has recently transferred from San Francisco to Chicago six months after a break-up with her boyfriend of two years. Her first court appearance is an agreed motion call involving none other than Kyle Rhodes.

Computer genius Kyle took the Twitter world by storm when he hacked into and shut it down for two whole days because of a woman. This of course angered a lot of people and earned him the nickname “The Twitter Terrorist”. Kyle was arrested, pleaded guilty, and spent time in prison. (Those who’ve read A Lot Like Love met Kyle when his sister Jordan visited him in the Metropolitan Correctional Center.) He is being released early due to his sister’s help in an FBI investigation. Kyle is pleasantly shocked when he comes face to face with Rylann after so long. When she comes to him after the trial asking for his help with something he overheard while in prison, Kyle is uncertain as he still holds ill feelings toward her office. But a man was murdered and his testimony would make her case, so Kyle agrees.

“You really think the grand jury will believe what I have to say?”

“Sure,” she said with a shrug. “I believe you.” When she finished writing, she looked up from her legal pad and saw him staring at her. “What?”

It was nothing really, that she believed him. Just words. “You’ve asked a lot of questions about me. Now it’s my turn.”

“Oh, sorry. But that’s not how this works,” she said sweetly.

“It is this time counselor, if you want to keep me sitting in this booth,” he replied, just as sweetly.

She shook her head. “You are just as annoyingly cocky as you were nine years ago.”

“Yes.” Kyle’s gaze fell to her lips. “And we both know how that turned out.”

About That Night is another terrific contemporary romance from the talented Julie James. She creates some of the best heroines I’ve ever read—they’re smart, principled, practical, and independent—and Rylann is no exception. James pairs them with heroes who accentuate their characters and personalities. From the title of this book, you know that Kyle and Rylann share a past, but it wasn’t exactly what I thought it would be. Instead, it was better! It was so sweet and touching and I loved it.

Kyle isn’t the typical “spoiled rich kid”. He’s confident, not cocky. Rylann refers to him as “sin in a suit”. He appreciates what he has and just wants to earn his way fair and square, not live in his billionaire father’s shadow. His resolution to the problem he created is handled maturely and shrewdly. It was the absolute perfect solution. I absolutely loved the fact that Kyle and Rylann never really forgot the other after so many years. It reminded me of the saying, “Good things come to those who wait.” Like Ms. James’s books, Kyle and Rylann were worth waiting for. *g*

So, if you enjoy reading smart, sexy, fun contemporary romances, you simply MUST read Julie James’s books. Every single one she has written is on my keeper shelves—they are that good. About That Night is another winner from James and a book I highly recommend!