Review -- The Art of Duke Hunting 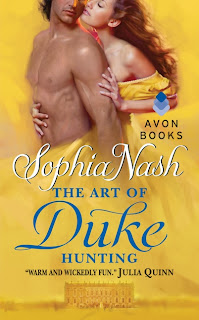 Roman Montagu, Duke of Norwich, comes from a long line of cursed dukes. And it’s all thanks to an accused witch and a “half dozen ill-plucked water fowl”. The previous dukes died because of or near a duck or ducks. Thus, the dukes are nicknamed the Duke of Duck. Roman is the seventeenth duke, and he prefers the moniker “Seventeen”. Because of the curse, Roman avoids being on or around open waters—which is exactly where he ends up after a night of carousing with the Royal Entourage. A night in which he remembers absolutely nothing, including how he came aboard a dreaded ship that ends up in the middle of a storm.

Widowed Esme March, Lady Derby, is on her way to Vienna to exercise her artistic passion when she spies a lone man struggling out on the deck amongst the violent gusts of wind and sea spray. He doesn’t seem to be fully conscious, so she helps him to the safe confines of her cabin. There, she recognizes him as the man she was instantly smitten with years before. She tends to him and the two share a heated encounter that leaves them both a bit disconcerted. The moment they finally arrive back in London, the Prince Regent has them immediately brought to Carlton House. Just as Prinny has ordered the other dukes of the Royal Entourage to marry (in order for the Crown to save face after their infamous night of debauchery), so must Roman. Esme and Roman marry, but can they make a happy life together out of a marriage of convenience?

The Art of Duke Hunting is the second book in Sophia Nash’s Royal Entourage series featuring six scandalous dukes who experience the ultimate hangover and ensuing consequences after a bachelor party goes awry. In this one, she has created two well-developed characters that not only have their own personal issues to work through, but mutual ones as well. Esme is a completely selfless woman who hides her true emotions and presents a calm front to the world. She loved her husband and vice versa, but he drank himself to death. Naturally, she feels as if he didn’t love her enough to stop drinking so much. So, she immerses herself in her art. Roman picks up on her façade and coaxes her to come out of her shell. But because he believes his days are numbered and has no desire to pass the curse on to any offspring, he can’t give Esme what she wants.

It was not that she was suddenly and mysteriously possessed of a certain type of aristocratic mien, nor was it her odd mood, one he was willing to overlook considering the extraordinary circumstances. But there was something more to it. If he had bothered to brush away the myriad complicated mathematical notations clogging his brain box, he might have seen what it was about her that he valued.

It was her heart.

She was a giver. In a world of takers, she was the opposite.

But what he was unwilling to part with was his own heart.

Ms. Nash has penned another hit with The Art of Duke Hunting! I loved this book and simply cannot wait for the next book in the series. This is the second in the series, but stands completely on its own. However, I would definitely recommend the first book, Between the Duke and the Deep Blue Sea, to enhance your reading pleasure. Looking for a well-written, poignant and witty historical? Look no further than Sophia Nash.