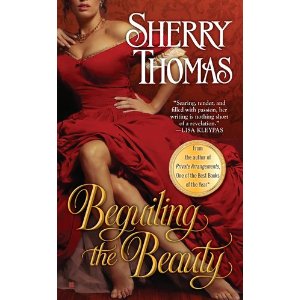 Christian de Montford, Duke of Lexington was a golden boy—handsome, wealthy, and blessed with an early discovery of a passion for natural history. One day when he was still a student at Harrow, he saw a woman who captured his senses and imagination at first sight.

"Her face—he lost his breath. He’d never encountered beauty of such magnitude and intensity. It was not allure, but grace, like the sight of land to a shipwrecked man. And he, who hadn’t been on a capsized vessel since he was six—and that had only been an overturned canoe—suddenly felt as if he had been adrift in the open ocean his entire life.”

Even after Christian discovers the woman is married, she haunts his dreams and fuels his fantasies. A few years after he first sees her, a disturbing incident with her husband, who dies soon afterward, combines with a few facts and many rumors to persuade him that her beauty is superficial, a glorious surface disguising a “shallow, greedy, selfish woman.”  A second sighting, five years after the first, demonstrates that her power over him has not been diminished by his disillusionment.  Ten years after that first meeting, Lexington is in Boston to deliver a public lecture on Lamarck and Darwin at Harvard University. When a member of the audience questions his statement that beautiful people are untrustworthy, he responds with anecdotal evidence about character flaws of the beauty who still commands an uncomfortable part of his thoughts.

Venetia Fitzhugh Townsend Easterbrook is that woman, and she is a member of Lexington’s audience that day. His words anger her, and they also destroy the barrier she has erected between herself and the painful memories of her first marriage. Arranging to meet her sister and sister-in-law in New York, she looks forward to privacy that will allow her to recover her shattered peace, but Lexington’s presence in the same hotel makes that impossible. In an effort to avoid being recognized, she adopts the identity of a German widow, Baronesse von Seidlitz-Hardenberg. When she interprets Lexington’s behavior as evidence of his arrogance, she remembers her sister’s words following the Boston episode: “Avenge yourself, Venetia. Make him fall in love with you and give him the cut.” Impulsively, she decides to do just that and books a stateroom on the Rhodesia, the ship Lexington is set to sail to England on the next morning.

What follows is one of the best ship romances I’ve ever read. Thomas pays tribute to the influence of Judith Ivory’s Beast in her acknowledgements, and the influence of this classic romance is evident. But Thomas’s story is uniquely her own, not derivative in the least. Venetia’s plan works all too well, and Lexington soon falls under the spell of the heavily veiled, mysterious baroness. The two quickly become lovers, and almost as quickly fall in love. Lexington is not at all the man Venetia expected him to be. But Venetia is hoist with her own petard because Lexington has fallen in love with a woman who does not exist and she dare not reveal her identity to the man who spoke of her with such contempt.

Thomas has once again created a heroine and hero who manage to fall within the conventions of romance fiction and yet remain distinctly individual. Lexington is titled and rich and the dream of every mother with a marriageable daughter, but he is also a scientist and scholar with little interest in society. The twice-widowed Venetia possesses a bewitching beauty, but she is neither unconscious of it nor spoiled by it. Indeed, she is fully aware of its power and regrets the way it isolates her and renders her as something out of the range of normality. She sees herself, to use her own term, as something of a “freak.” Both Venetia and Lexington are imperfect characters, and their recognition of their imperfections, their willingness to admit their mistakes, increases their appeal.

Some may label this a love-at-first-sight tale. I disagree. Thomas distinguishes Lexington’s desire for Venetia, which is instantaneous, from the love that develops after their time together on board the ship. When he still believes his baroness and Venetia are two women, Lexington is dismayed by his physical response to Venetia when the baroness holds his heart. The story is compelling because it is a romance but also because it raises issues about beauty and responses to it and the effects of misjudgment when appearance is confused with reality.

The secondary characters are neither conveniences nor usurpers. Each serves a definite purpose and appears as an individual with a story. Lexington’s relationship with his stepmother reveals something of his character, as does Venetia’s close ties to her sister and brother and sister-in-law, who are more than characters bearing placards proclaiming “My story is next.” Even Lord and Lady Tremaine, whose cameo delighted me since Private Arrangements is one of my all-time favorite romances, were included for a reason other than as a nod to fans.

Finally, there is Thomas’s prose, which, as always, is lucid and lyrical and lovely. Her words always seem to be perfectly chosen whether she’s showing Lexington thinking that Venetia has “pickpocketed his heart” or Venetia becoming aware of the physical transformation love has wrought in her: "Her familiar features had been transformed. By excitement, elation, and caution thrown to the wind. She looked like a woman for whom life was only beginning, rather than one weighed down and calcified by disappointed dreams.”

Complex, compelling characters, an unusual and emotionally powerful plot, and prose with the range and beauty of music—what more can a reader ask for? Maybe more of the same. I am confident that’s what Thomas will provide in the next two books in her first series. My recommendation is to put Beguiling the Beauty on your must-buy list, and while you’re at it, you should add Ravishing the Heiress (Millie and Fitz’s story, July 3) and Tempting the Bride (Helena and her hero’s story, October 2).