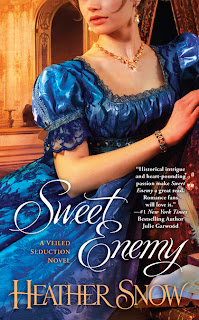 It usually takes reading a few books by a given author before they end up on my auto-buy list but, occasionally, an author hits it out of the park on the first try.  So was the case with debut historical romance author Heather Snow.  Her first book, Sweet Enemy, kept me happily reading late into the night and has me now counting the days until the August 7th release of Sweet Deception, the second book in Snow's Veiled Deception series.


Home from the war, Geoffrey Wentworth, Earl of Stratford is settling into the responsibilities of the earldom he never expected to inherit and focusing all his energy on pushing a bill through Parliament that will help his fellow soldiers; those men who have neither title nor wealth nor homes waiting for them when they return to England.  Geoffrey's mother has other ideas.  Summoned home on the pretext of an emergency, he discovers guests already arriving with invitations in hand for a house party; invitations supposedly issued by Geoffrey for the express purpose of finding a bride.  Needless to say, he is not amused but his clever (and very manipulative) mother has included the daughters of powerful men whose backing Geoffrey needs to see his soldier bill pass.  Unfortunately for Geoffrey's mother, one of the guests has brought along her niece, a most unsuitable candidate for the type of wife he needs but perfect for type of wife he wants.

In her simple satin dancing dress  trimmed with shiny gold piping around the sheer sleeves, hemline and bust, she stood out in stark contrast to the wasted opulence that surrounded her.  He remembered how ill at ease she'd seemed this afternoon surrounded by some of the more frivolous members of society.  Nothing in her mannerisms gave her away tonight, but he got the distinct feeling that she, like him would be more comfortable with soldiers and commoners than with this lot.

She laughed at something Aveline said, and the husky timbre of her voice vibrated through Geoffrey, his body hardening in reaction.  Just being in her presence affected him, had from the moment he'd broken her fall in the library.  It was as if his very skin hummed with energy, every nerve on edge.  The closest feeling he could compare it to was the invigorating moments just before battle, when he felt more alert and alive than at any other time in his life, ready to take on the world.

Brilliant chemist and healer, Liliana Claremont has no intention of marrying, much to her aunt's distress.  Liliana has more important life goals and primary at the moment is discovering who lured her father to the meeting that ended with his murder.  Her investigation thus far has led her to the late Earl of Stratford so when her aunt receives an invitation to a house party at the current Earl's home, Liliana jumps at the opportunity to go, not to capture the Earl's attention as a prospective bride but, rather, with the intention of finding out just what part the late Earl may have played in her father's death and what Geoffrey Wentworth, the current Earl knows about it, if anything.  She never expects to be attracted to the handsome Earl and, even worse, like him,

He hadn't taken her to task for stealing his horse.  He hadn't berated her for embarrassing him in public.  He hadn't judged her for her unconventionalities and was now, in fact, conspiring to enable her.  "You are very kind," she said, and realized she spoke the truth.

Nor does she expect to find a man unimpressed with his position in life who is more concerned about the fate of those far below him in class. And she especially does not expect to find a man impressed with her intelligence, who treats her with respect, understanding and support of her chosen career; a man whose plans to help those less fortunate could go down in flames if he chooses Liliana.

Knowing how much it will hurt Geoffrey if what she suspects is true, will Liliana abandon her search for her father's killer?  How will Geoffrey react when he discovers that the woman he's come to know, trust and love has been lying to him the entire time about her reasons for being in his home?   And will they ever discover just who the murderer is?

Passionate, witty and refreshingly original, with a hero and heroine I fell in love with and a mystery that kept me guessing throughout most of the book, Sweet Enemy is a treat not to be missed.  If you haven't read it yet, I highly recommend picking up a copy today!


Has a debut book knocked your socks off lately?  Tell us about it!
Posted by pjpuppymom at 12:00 AM