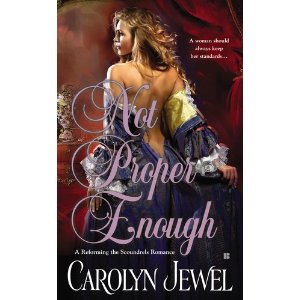 Lady Eugenia Bryant has returned to London to guide her younger friend, Hester Rendell, through her first season. She has left formal mourning and is happy to be wearing colors again, but she never expects to find again the kind of love she shared with her late husband, Robert Bryant. Her focus is seeing that Hester has a successful season. Since Hester is far from the typical debutante, helping her find her way among the cats and cads of society is not without challenges. Complicating the picture is Grenville Foxman Talbot, Marquess of Fenris, once her husband’s best friend, whose insults aimed at Eugenia led to an estrangement between the two men. But however strongly she dislikes Fenris, Lady Eugenia cannot ignore him.

Fenris is not now the man he was when he believed Eugenia was not good enough for Robert. He is his own man; he makes his decisions uninfluenced by others, including his father. He fought the attraction he felt for Eugenia years ago, but now that she’s free he determines that he will possess her in fact as well as in his dreams. He uses the considerable powers of his personality, his physical presence, and his disregard for propriety to seduce her. His touch and his wit prove irresistible, and the two are soon involved in a passionate affair. But Fenris is not content with Ginny’s body alone, and claiming her heart and mind proves a far more formidable task.

Fenris is not the only seducer in this tale. Jewel’s writing and characterization seduce even the reluctant reader. I had never read a book by this author when I agreed to review this book, and I confess I groaned when I realized it was an I-can’t-stand-him-but-I-can’t-resist-him story. That’s a trope I try to avoid. But I soon found myself captivated by Eugenia and Fenris, unable to resist their dialogue, their intelligence, and their physical and emotional connection. For readers who like their romances hot, Jewel creates superlatively steamy scenes, but I was more impressed, because I find it a rarer gift, that she builds sexual tension with equal skill.  A touch, a look, an entry into a room—all these are used to heighten the tension between the heroine and the hero. The sensuousness of the writing increases the sensuality. I was particularly struck by Eugenia’s response to Fenris’s voice and his words since I think these are underused elements in romance fiction.

She’d never heard a man speak as if the words themselves were made of passion, but that was what she felt as Fenris spoke to her now, and that, that shocked her to her toes.

I also liked that Eugenia’s love for Robert was deep and genuine. They were happy together in every way, and falling in love with Fenris does not diminish her love for Robert. Although the chemistry between Eugenia and Fenris is strong from the beginning, their relationship develops through shared conversations and laughter. I have a weakness for lovers who share laughter since I can’t believe in an intimacy that doesn’t include laughing together. I also like books that are shot through with humor when the novel is anything but light. Not Proper Enough satisfied on all these counts.

The story includes a secondary romance between Hester and the Duke of Camber who bond over their interest in botany. Hester is an appealing character, and a love match between the two is unusual enough to make it interesting. I wanted to see more of the relationship between these two. The other thing that kept Not Proper Enough from being a five-star read for me is that I’m not certain how it works as a standalone. I stopped about a third of the way into the novel, frustrated because I felt I was missing the back story between Eugenia and Fenris, and read Not Wicked Enough before returning to NPE. Readers less anal than I about understanding nuances and details may not be bothered as I was. I do recommend Not Proper Enough, but with the warning that you may want to read Not Wicked Enough first. It also is well worth reading. And I’m hoping there will be at least one more book in the series. There’s definitely hero material in a secondary character in need of an HEA.

~Janga
http://justjanga.blogspot..com
Posted by pjpuppymom at 12:00 AM