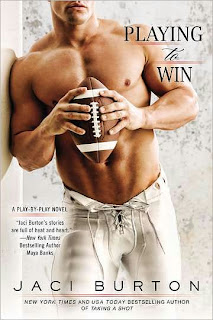 Football star Cole Riley is thrilled to finally be playing for his hometown team, the St. Louis Traders. He’s played with other teams and was eventually let go mostly due to his frequent altercations with the media. He has since been labeled as wild and a hot head. If he wasn’t such a great player, one would wonder why would take a chance on him. Because he is such a terrific wide receiver, the team and his agent, Liz Darnell (heroine of Changing the Game), hire an image consultant to help with Cole’s off-field behavior. Naturally, Cole is not happy about it or about having someone tell him what to do and how to act. He believes the problem lies solely with the interfering media. However, once Cole gets a look at the woman charged with helping him, he is more open to the idea.


Savannah Brooks has worked hard to get to where she is, including never mixing business with pleasure. Despite her initial attraction to Cole, she takes on the task of attempting to tame the wild sports star. Her first few interactions with him leave her confused as he acts like a gentleman. But later when the media shows up, he handles himself poorly and doesn’t know how to deal with them. Cole desperately wants to keep his public life completely separate from his private life and won’t even talk to about his family. She works hard to help him but in order to do that she needs to get to know the man behind the mask—to see what makes him tick. When she is finally able to crack that wall, her outlook begins to change...and her feelings begin to grow.


Playing to Win is a great addition to Jaci Burton’s popular Play-By-Play series. At first you believe Cole is nothing but a cocky jock—and he is—but he begins to come to terms with some of his issues. He never let himself get involved with other teams he played for so that if/when he left, he wouldn’t get hurt or be upset. He took things the media said personally and helps him to handle them in a positive way and not allowing them get under his skin. has her own baggage that she has suppressed that comes to light when she sees similarities between her and Cole.


It was like listening to a version of herself. Only Cole was a lot more honest in how he felt, something she’d never allowed herself to be. He was saying all the things she felt inside but had never given voice to.


“To be that open and honest with someone.”


He shrugged. “I’ve never done it before. I’ve never said those things to anyone but you.”


Her heart squeezed. “Why me?”


“I guess I just wanted to say it—to someone. Or maybe you needed to hear it. I don’t know.”


Throughout the book, they both grow and Cole ends up helping as much as she helps him. I must say, it was quite enjoyable to watch the tough jock fall for the sweet Southern belle. But don’t let that fool you, because these two positively heat up the pages! Fans of the series get to visit previous characters and meet new ones as Cole’s sister, Alicia, is the heroine of the next book in the series. I’m especially looking forward to it because Alicia is a sports medicine specialist and that’s what I wanted to be once upon a time. J