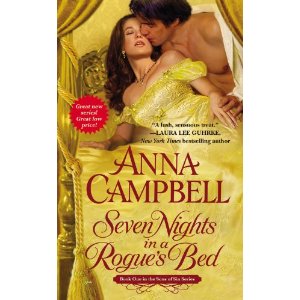 Unfairly robbed of his birthright, Jonas Merrick has turned into a bitter, ruthless man focused solely on increasing his wealth and wreaking vengeance on his enemy.  When he discovers that his enemy's wife has a weakness for gambling, he uses it to put her in his debt then offers to erase the debt in exchange for seven nights in his bed.  His plans go awry when the woman who appears on his doorstep one dark and stormy night is not the shallow beauty married to his enemy but her lovely, innocent younger sister.  When that woman turns out to be smart, feisty, courageous and lit from within with an innate goodness, Jonas goes from annoyed to intrigued and a new plan is born.  He offers her a wager:  spend seven days and nights as his guest.  During that time he'll do his best to seduce her but sleeping with him will be her choice and, at the end of the seven days, Sidonie will be free to leave his home with her sister's debt paid in full, whether his seduction attempts are successful or not.

The last place Sidonie wants to be is standing on the doorstep of Jonas Merrick's castle but she'll do anything to help the sister who took care of her when they were children.  If sleeping with Merrick will keep her sister and nephews safe from harm then so be it; she'll go willingly to the man's bed no matter how hideous he may be.  It doesn't take long for Sidonie to realize that there's much more to Jonas Merrick than what he presents to the world.  Though his face is scarred and he continues to insist he's a bastard through and through, the more time Sidonie spends with him, the more convinced she becomes that a good man lurks beneath the hard shell life's experiences have built around his wounded heart.  Desire flares and, as walls begin to crumble, the first flickering embers of a deep and abiding love spring to life...if Sidonie and Jonas have the courage to reach for it.

I loved this book so much.  I think it's Anna Campbell's best writing to date and that's saying a lot considering the quality of the books she's already published.  She immediately grabbed my attention with the riveting first sentence:

Storms split the heavens on the night Sidonie Forsythe went to her ruin.

As someone who grew up devouring Gothic romances from Victoria Holt and Mary Stewart, all it took was that one sentence for me to know I was in for a treat.  Campbell then gave me a hero, damaged both physically and emotionally, and made me care deeply for him.  Jonas tries so hard to be a villain, and he has his harsh moments to be sure, but there's just too much goodness at his vulnerable core, waiting for the right woman to heal his heart and set it free, for him to truly be a bad guy.  He believes his scars make him repulsive; his actions, unlovable.  His response - the parts he shares and those he doesn't - when Sidonie finally gives herself to him made my heart ache.

He propped himself on one elbow, keeping a careful eye on the edge of the bed, and took her hand.  "Are you all right?"
After a hesitation, she nodded.  "Yes."
He waited for more but she remained silent.  For a woman, she was deucedly closemouthed.  How he wished she'd confide in him, trust him.
Why should she?
Except she'd trusted him with her body.  He didn't underestimate what that meant.  He wanted to thank her.  He wanted to beg her to stay.  He wanted to tell her she was the most marvelous being in creation.  Emotion silenced him, made it impossible to express what lay in his heart.  He raised her hand to his lips and kissed her palm with a veneration that sprang from his soul.
He wasn't good enough for her.  But by God, he meant to make her happy while he had her.

Sidonie is a heroine worthy of our damaged hero.  She's strong, loyal and has so much love to give but she's only seen the bad side of marriage and has no desire to be under a man's control.  And her loyalty, one of her best qualities, causes her to make a decision that could ultimately cost her the love of the man who has captured her heart.  Ms. Campbell had me flipping pages as fast as I could to find out what happens to these two people who so deserve a happy ending.

Adding to the suspense of whether or not our couple finds happiness is a villain I could have easily sent to his just reward and Sidonie's sister, a woman who at times elicited my sympathy while other times I simply wanted to whack her upside the head for being shallow and selfish at Sidonie's expense.

Seven Nights in a Rogue's Bed is the first book in Campbell's Sons of Sin series.  I read it in one day then read it a second time more leisurely.  I'll most likely read it again before book two comes out. Yes, I enjoyed it that much. I highly recommend this book and am already counting the months until I can get my hands on the next two in the series.  We meet the heroes of those books, Richard and Cam in this book, along with Sirius, a mutt of undetermined origin with whom I tumbled immediately into puppy love and who Ms. Campbell has assured me has a significant role in the next book, A Rake's Midnight Kiss.