We are happy to welcome multi-talented author Carrie Lofty back to the blog! When she was here a couple months ago, she was talking about her latest Christie family book, Starlight. This time she is dishing about her new digital historical novel from Pocket Star, His Very Own Girl. It's out NOW! From Carrie's website: it’s a WWII romance featuring a female British civilian pilot and the American paratrooper medic who opens her heart. Sounds wonderful! Welcome, Carrie!


Except for Bing Crosy at Christmastime, I didn't know very much about 1940s music until I started research His Very Own Girl. Then… Well, I love music! I started listening to it all the time. Music from the 40s became the best, most enjoyable way of tapping into the era.


Bing Crosby was huge. During the war, one out of every four songs played on the wireless was one of Bing's tunes. Can you even imagine?? Until the arrival of a young Frank Sinatra on the scene very late in the war years, Bing was the crooner. He ran the gamut between love songs and rousing songs about supporting the troops. Some were even cheekier, such as "There'll Be a Hot Time in the Town of Berlin", which he sang with the Andrews Sisters.


There's never been a jauntier tune about overtaking a city. The 40s…they were strange times.


The other facet of WWII-era music was swing. Bandleaders were like producers and DJs today. No matter the guest singers and musicians, top billing went to the bandleader. Benny Goodman, Harry James and the ever-popular Glenn Miller were the superstars of swing. "In the Mood" was probably Miller's most famous tune, which has transcended the decades.


Here Lulu Davies, a British civilian pilot, and Joe Weber, an American paratrooper and medic, share a dance. Everyone was living on borrowed time, which meant grabbing a partner right quick!


Stuff in Joe held a pilot named Lulu Davies. He held her and he danced with her.


Their bodies moved in time to the orchestra's fair version of "As Time Goes By." Her easy, graceful rhythm offset her crisp posture. Everything about her was ladylike and proper—everything except her slacks and that wild glint in her eye. But she wore even the slacks with feminine bravado. 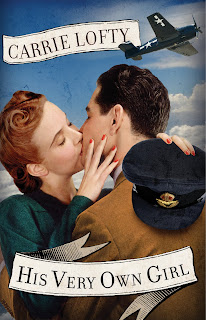 "Private?" Lulu was looking up at him.


"Call me Joe," he said. "'Private' makes me think I've done something wrong."


They only touched with arms and hands—their bodies still a frustrating, respectful distance apart—but Joe absorbed the contact like sunshine on a lazy summer afternoon. "I never would've taken you for a pilot," he heard himself saying.


She smiled so deeply that a dimple appeared on her left cheek. "And I never would've taken you for a medic."


A couple bumped Joe from behind. He tightened a protective hand along Lulu's upper back. Her breasts brushed his chest. Joe's muscles snapped to attention. Their eyes caught and held as an electrical current did the jitterbug up his spine.


"I wouldn't be dancing with you if I didn't want to be close."


Her smile, her body, her bold demeanor . . . she wanted to be with him. A sudden surge of confidence walled his doubts behind a brick wall.


Slow it down, Web. Pull it together.


Lulu blushed and lowered her eyes. This wild woman was capable of something as girlish as blushing? "Forget I mentioned it."


The orchestra wound down and he prayed for another slow song. C'mon, boys. One more. They were under some sort of spell, which might be broken if they left the dance floor. Lulu seemed to hold her breath as well. When the slow, clean clarinet and swaying rhythm of "Moonlight Serenade" started, they both exhaled.


Lulu threw back her head, laughing. "It won't end unless we want it to, Joe."


The hope these entertainers provided trickled down to everyone with access to a radio or a dance hall. As Glenn Miller said, "America means freedom and there's no expression of freedom quite so sincere as music."


Summer has been a blast! Available now from Pocket Books are three Christie Family romances. FLAWLESS kicked it off with a tale of an estranged couple's search for love. The 99¢ tie-in novella, "A LITTLE MORE SCANDAL" follows two aspiring lovers to London. And the Scottish-set second novel, STARLIGHT, was an RT BookReviews 4½ Star Top Pick. "Richly nuanced characters and a superbly realized Victorian setting come together brilliantly." ~ The Chicago Tribune

Where to find me:

I'd like to give away a digital copy of HIS VERY OWN GIRL in any format. Just answer: Do you have a favorite musician from the 1940s, or a favorite crooner from today—Harry Connick, Jr. or Michael Boublé, for example?

Thanks again to The Romance Dish for featuring His Very Own Girl!
Posted by Andrea at 12:30 AM