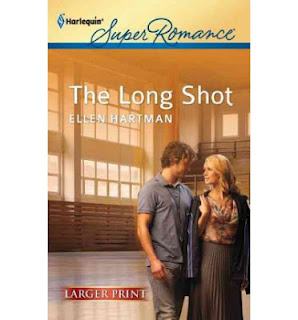 It's a while since I did a Harlequin roundup (just checked, going back to January this year!), so I thought I'd share a couple of recent discoveries that are still available through the online sellers and as e-books.

I'd like to start with a book that was a bit of a revelation, May 2012 SuperRomance THE LONG SHOT by Ellen Hartman . I actually hadn't heard of Ellen until our wonderful RITA-winning Bandita Beth Andrews invited her to be a guest on the Romance Bandits. Here's a link to the interview: http://romancebandits.com/ellen-hartman/

Ellen was such fun that I thought I'd give her book a go - I've found a lot of favorite authors because they've come across really well in social media. Well, what a great read - highly recommended!

This is one of those books about returning to your beginnings and this time, doing it right. Baseball star Deacon Fallon goes back to his home town after his retirement from the Major Leagues, determined to establish a life for himself and for his younger brother. Through a series of funny mishaps, he ends up coaching the girls' basketball team at the local high school and finds sparks striking with gutsy, clever teacher Julia Bradley. But it's not all comedy - Deacon has a big secret that he knows makes him unworthy of Julia.

This is one of those wonderful books where you stand up, cheering for all the characters. You cheer for Deacon summoning up the courage to share the shame that has blighted his life. You cheer Julia who won't bow down to the sexist attitudes of the good old boys in this small town and even more dangerously, won't let Deacon run and hide from what is obviously true love. And you cheer for the boys and girls at the high school who discover some important life lessons through the basketball season.

This book has everything. It's funny. It's touching. It's inspiring. I've already got my order in for Ellen's next book (September 2012), OUT OF BOUNDS, featuring Wes, Deacon's brother. 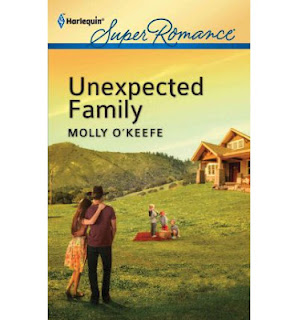 My second recommendation is another SuperRomance. I think this is such a great line - you get a really meaty, emotional read and the longer length allows writers to explore subplots and secondary characters more than is possible in the shorter categories (I love them too but for different reasons!).

I've reviewed Molly O'Keefe's books before on the Romance Dish. She's a wonderful writer who tells a darn good story.

She's now writing single title books - here's a link to Janga's five star review of Molly's June release CAN'T BUY ME LOVE: http://www.theromancedish.com/2012/06/review-cant-buy-me-love.html But my most recent Molly O'Keefe is the follow-up to her February 2011 book, HIS WIFE FOR ONE NIGHT. UNEXPECTED FAMILY (June 2012) is another story about going back to your origins and facing your demons. Is it just that these stories appeal to me or is this a popular theme in Supers? Interesting question!

Rodeo superstar Jeremiah Stone returns to the family ranch in the California hills with his three nephews after the death of his sister and her husband. Jeremiah isn't coping with becoming a father, and he refuses to face his repressed anger over giving up a life he loves to take over responsibilities that he feels ill-equipped to handle. He's a good man but he's failing at the monumental tasks he's set himself - and he doesn't know where to turn for help. At this difficult point in his life, the last thing he needs is a rekindled relationship with beautiful and fiery Lucy Alatore who is back home licking her wounds after her Los Angeles business fails.

Again, this is a book where you want to stand up and cheer for the characters. The people in this book are facing big issues and their responses are heart-wrenching. Not to mention that this story has all the wonderful signature MO'K sensuality and sizzle and tension. Again, highly recommended. 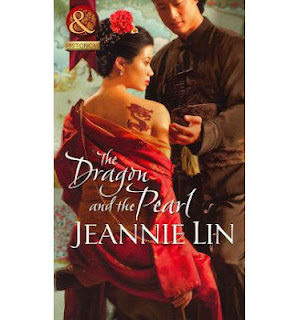 My final book in this roundup has nothing to do with people returning to small towns where they grew up. Or even with sports stars coming to terms with life after the spotlight (although the hero of this one is a martial arts expert so perhaps that's not entirely accurate!).

Jeannie Lin won the 2009 Golden Heart for best historical manuscript for her debut BUTTERFLY SWORDS (currently burning a spot in my TBR pile). I bought THE DRAGON AND THE PEARL, the first book of hers that I've read, after someone quoted a beautiful passage about a bamboo forest on a blog that I did for the Romance Bandits about setting. And I'm so glad I did!

In her Harlequin Historical THE DRAGON AND THE PEARL (September 2011), Jeannie sweeps you away to the exotic and dangerous world of 8th century China, a place of warlords and emperors and concubines. Against this glittering, vivid background, Jeannie tells the story of reluctant concubine Ling Suyin and powerful, mysterious warlord Li Tao. It's dramatic, compelling and breathtakingly romantic - and the love scenes are as steamy as a freshly cooked dim sum.

These two characters are wary, worldly and know that the slightest wrong move could mean their death. I kept thinking of the old joke about how porcupines make love. VERY carefully! The sexual tension flares to white hot as these two circle each other, not sure if they should trust, but drawn irresistibly to the other person in spite of the risk.

I love stories like this - the stakes are so high and when the characters fall in love, they fall like a ton of bricks. Big happy sigh when I closed this one up - and then I rushed straight to the book depository to order Jeannie's other two Chinese romances, BUTTERFLY SWORDS (October 2010 - a prequel to this one) and MY FAIR CONCUBINE (June 2012 - what a fun title!). Again, highly recommended.

So have you read any of these authors? Do you like romances about people going home and making sense of it all at last? Have you read any good Harlequins lately? I'm always looking for recommendations.