Guest Review - - His Very Own Girl 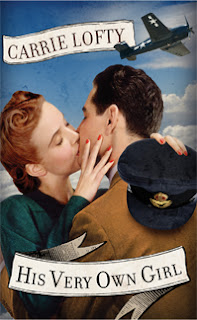 The story opens January 1944 in Leicestershire, England. Louise “Lulu” Davies is a pilot for the English Air Transport Auxiliary. She has her own, very personal reasons for doing her part in the war. Her parents were shot down five years earlier by the Italians. Her fiancé was so emotionally damaged by war that he killed himself after he survived Dunkirk. Lulu sees her flights as the only means available to her for avenging these deaths. Her goals are to fly bigger planes and to protect her heart from another devastating loss.

Joe Weber is a guy from North Shore, Indiana, who spent three years in prison for assaulting the man who raped his sister. He joined the Army wanting to be a paratrooper and a clean break with his past. Instead, he’s a medic, and a piece of his past is in England with him. His company is awaiting orders, and Joe is nervous about his medical skills which have yet to be tested in battle.  He is a man who sees his role as keeping people safe. That’s how he looks at his job in the war; that’s how he sees his future as a mechanic and family man he dreams of becoming someday.

Lulu and Joe first meet when something goes wrong with the Hurricane (a British fighter plane) Lulu is flying, and she is forced to crash land it. Joe is the first one on the scene, giving him a chance to use some elementary medic’s skills and offer comfort to Lulu, who is more shaken by the experience than she is willing to admit. Later, when Lulu and her friends set out for a few beers and some dancing, she meets Joe at a club. The attraction between them is quick and intense, but their differences are great. Not the least of them is Joe’s attitude toward Lulu’s role in the war. When he calls her “disarming,” she makes a joke about jumping with him into Berlin to disarm the enemy. Joe sees no humor in her comment.

The idea of Lulu Davies or any woman making a combat jump pushed ice chips through his veins. Bad enough she was a civilian pilot, ferrying planes all over Britain—dangerous work that women shouldn’t need to do. Her crack wasn’t funny because it hit too close to home.
Despite their differences, they fall in love. The conflict between their views of women’s roles and of what they want out of life makes their love difficult. Joe is lost after their first kiss. “All he knew for certain was that he wasn’t kissing her anymore. And any moment that he wasn’t kissing her was a moment wasted.”  Lulu is more cautious, determined to guard her heart no matter how hard Joe makes it pound.

She missed silly jokes and bumbled talks and those embarrassing moments of intimacy one only shared with a trusted partner.

But what she missed was also what hurt the most when it ended.

They are soon separated by the war. Joe is part of the Normandy D-Day invasion. Although a noncombatant as a medic, his life is constantly in danger. Every day he sees horrors beyond imagination. The next moment carries no guarantees. Cold, hunger, and terror are his daily companions, and yet he finds satisfaction in the work he does and in his relationship with the men who call him “Doc.” Letters from Lulu are a lifeline to another world, the future he hopes they will share.

Meanwhile, Lulu’s wish to fly bigger planes comes true, but with the bigger planes come more dangerous missions. Her fears for Joe are constant. She fears he won’t return, and experience has taught her that even returning doesn’t mean he’s come back safe and whole. Her friendship with another man holds the promise of a saner, less complicated life, but this woman who once never let herself think of the future is beginning to hope for a future with Joe.

When I finished this book and prepared to move on to something else, I felt disoriented, as if I had returned from a long journey and had to allow myself time to feel at ease again in the place I belong. From the large details to the smallest ones, Lofty immerses her reader in the World War II setting. The mindsets of the characters, the rationing of food, gas, and soap, the music that plays as clearly as a soundtrack in the reader’s head, the language in all its variety, the physical and emotional brutality of war—all of it is true to the period. There’s one scene in which Lulu asks Joe to draw lines like stocking seams with an eye pencil on her bare legs. It’s a small scene, but it reveals much about what these two people feel for each other and about the world they live in, a world where laddered stockings and kohl pencils can’t easily be replaced and every dance might be the last one.

Lulu and Joe are rich characters, but so are the secondary characters. Some of them are likeable; some are not. But they all feel real. They are changed by their war experiences. They connect and disconnect with one another. The war itself is real: blood is red, human bodies are fragile when facing the machinery of war. Some people live; some people die.

His Very Own Girl is on my list of the best of 2012. I’ve loved other Carrie Lofty books I’ve read. I’ve ranked them high on the power of the story, the complexity of the characters, and the grace of the prose, but even among an impressive volume of work, this one is special. I highly recommend it. If you don’t have an ereader, download one of the programs that will allow you to read the book on your computer. It’s that good. But be prepared to lose yourself in a world your parents or your grandparents knew, and be prepared with a box of tissues.