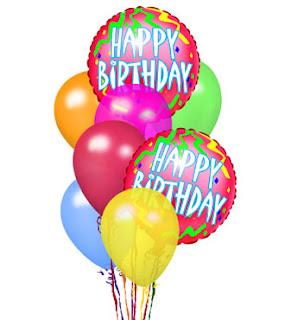 September 20, 1951 was an exciting day in my family.  For my parents, it heralded the arrival of their first-born (that would be me) and only daughter.  It was cause for celebration; one of many notable events that occurred during that year.  Okay, so my birth was only notable within my family but still...  As I celebrate my birthday today, I thought it would be fun to look back at some other notable events from 1951!

The average cost of a new house in 1951 was $9,000.  Can you imagine?  Heck, you'd have trouble today buying a new car for twice that amount and that would be the no-frills variety.

The first nuclear bomb tests were conducted in Nevada.

An American in Paris won the Academy Award for Best Motion Picture.

The Caine Mutiny by Herman Wouk topped the NYT Bestseller List the week I was born.

Because of You by Tony Bennett topped the Billboard charts in September 1951.

1951 was the year Tupperware parties were introduced!

Pabst aired the first color beer commercial on television. (and the rest, as they say, is history)

Coast to coast direct telephone dialing began (without operator assistance) but we still had to share our party line with two other families.

The first oral contraceptive was invented.

The first color television pictures were broadcast from New York's Empire State Building. (but it would still be several years before color televisions became the norm in most American homes)

The average cost of a gallon of gasoline was $0.19.  Wrap your head around that one!

J. D. Salinger's The Catcher in the Rye was published.

Many romances of 1951 were in comic book format, such as Top LOVE Stories.

That's a peek at what was going on the year I was born.  What are some of the highlights of the year you were born?  Because I love giving away gifts on my birthday, three randomly selected people leaving a comment today will receive a pack of books from my prize stash!