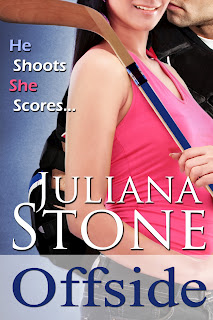 PJ here!  Juliana Stone is one of my favorite paranormal romance authors.  Her jaguar shapeshifter heroes rev my engine and the taut suspense in her novels keeps me on the edge of my seat.  But we're not here today to talk about the paranormal.  The sneak peek we're bringing you today is from Juliana's new contemporary romance (color me excited!) and it brings readers one of my favorites:  a strong and sexy hockey playing hero.  Only, this time, not only does the hero play hockey but so does the heroine!   Take a peek...

When hockey phenom Billie-Jo Barker returns home and decides to play in the local Friday night hockey league, all hell breaks loose. Not because Billie's talent is in question, but because Billie is a woman. And though these are modern times, some of the local guys still have a problem letting a girl into their 'men's club.'Soon, Billie is at the center of a small town battle of the sexes, with everyone choosing sides. Her sisters. The townsfolk. Her friends. And yet, the only person whose opinion she cares about doesn't seem to care much at all. Logan Forest, the man who broke her heart when she was eighteen and the man she now shares the bench with every Friday night.She's got a lot to prove and though Billie Jo Barker scores on the ice, will this girl ever score with the man of her dreams?


“I’m just trying to look out for you, kid.”
Kid.
Something unraveled inside Billie. Something hot and urgent and big.  It swooshed through her like a tornado, filling her up until there was nothing to do but let it out.
She took a step toward Logan and glared at him. The air crackled between them.  She felt it like an electric shot that went right through her.
Billie was Indignant.  Annoyed.  Pissed.
Aroused.
Kid?  Really?
“I don’t need anyone to look out for me.  I’ve been doing just fine on my own for a long time now.”  She paused and tried to grab hold of the emotion inside her.  “I’ve dealt with sexism and small minds for most of my life.  They may have loosened their restrictions in the pro league in Sweden, but that doesn’t mean any of the women who played were welcomed with open arms.”
She ran an agitated hand through the tangled hair at her nape.  “I just,” it took a bit of effort to keep her voice calm.  “I just didn’t expect that kind of crap here.” She shook her head.  “I really didn’t, but if that’s the way the guys want to play, they’re stupid if they think it’s enough to stop me.”
“Billie—“
“I’m not done.”
Logan arched a brow—one that Billie missed—but she was roaring ahead like a freight-train and nothing could stop her now.
“I’m a big girl.”
His brow arched a little higher and if she was paying attention she would have seen the slight lift to the edge of his mouth.  It was a sexy lift.
A dangerous lift.
“I can see that,” he replied softly.
“I don’t need someone like you looking out for me.  Not on the ice or off of it either.”
Her temper boiled over as everything from the night before hit her.  The damage to her car.  The Neanderthal attitudes.  Ed’s smirk from less than an hour ago.
She leaned forward, so close she could count the long lashes that fringed his eyes.  Her heart sped up and the butterflies in her stomach kicked into overdrive.
“And in case you haven’t noticed, I’m not a damn, kid!”
“You said that.”
Chest heaving, Billie’s eyes dropped to the pulse that beat at the base of Logan’s neck, and then her gaze drifted upward until she settled on his mouth.
His incredible, sexy, wanton mouth.  An image of his lips sliding across her body brought a new batch of heat to her skin, but it was a heavy heat, one that settled between her legs in a slow, torturous throb.
Was she insane?  Probably.  What other reason was there for what she did next?
Billie took another step forward and Logan took one back, but the truck didn’t allow him to move further.  She stood on her toes, and sank her hands into the thick hair at his neck.  His subtle, clean scent filled her nostrils and it was the sexiest thing ever.  She leaned into him, her eyes never leaving his.
And then she kissed him.
Not a soft butterfly kiss. Not a tentative, getting-to-know-you kind of kiss either. But an aggressive, no-holds-barred kind of kiss.  Her mouth was open and she moved against him like she was starving. As if he was the only thing in the world that could feed her.
His mouth was warm and he did nothing to stop her as her tongue plunged inside.  Her lips skated over his—she massaged his skull and held him in place.  God, he tasted like heaven—sweeter, hotter, and better than she remembered.
Kid?  No effing way. Billie withdrew her tongue and suckled on his bottom lip, her eyes open once more so she could watch him.  So he would know she was playing with him.
So he would know that she was in control.


Offside will be available in digital format on October 1st from all major e-book retailers.

You can find more information about Juliana, her paranormal books, her indie contemporary, Offside and her upcoming (2013)  contemporary trilogy, The Bad Boys of Crystal Lake at her website.  Readers can also find Juliana at Facebook and Twitter.

Are you a fan of romances with sports heroes - or heroines?  What are some of your favorites?