Review -- How to Capture a Countess

How to Capture a Countess
The Duchess Diaries—Book 1 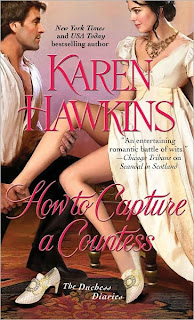 From the Diary of the Duchess of Roxburghe


I have concluded that neither my nephew nor Miss Balfour is able to refuse any challenge made by the other, regardless of how reckless it may be.


I am beginning to worry that neither will survive what is either the oddest courtship known to man, or the most serious game of one-upmanship I’ve yet to witness.


Either way, the outcome is sure to be vastly entertaining.


How to Capture a Countess is the start of a new series by Karen Hawkins called the Duchess Diaries. Each chapter of this book begins with a diary snippet from the Duchess of Roxburghe, so I thought it fitting to start my review with one of my favorites and one that describes this book perfectly. The duchess has no children of her own, so she dedicates herself to “helping” her sister and her sister’s grandchildren....


Six years ago at a ball, Lord Alton Sinclair, also known as Lord Sin, endured humiliation at the hands of Miss Rose Balfour after a kiss in a moonlit garden landed him in a fountain. The lady swiftly ran off and it wouldn’t have been so bad if Sin hadn’t subsequently been discovered by a small group of the guests who promptly labeled him as “Lord Fin”. He searched for Rose to settle the score, but was not able to find her. Six years later, Sin spies Rose’s name in a letter from his great aunt, the Duchess of Roxburghe. In the letter, the duchess takes Sin to task for refusing to attend her upcoming house party and lists the names of a few of her goddaughters (one of which is Rose) who might be in attendance. Sin immediately changes his mind and accepts the invitation, and insists that Miss Balfour be invited. He sees this event as the perfect opportunity to exact revenge on her.


Rose Balfour was infatuated with Lord Sinclair from the moment she first laid eyes on him years ago at sixteen years old. Her heart thrilled at the chance to finally speak with him. However, she didn’t know what to expect when they were alone. Despite nearly being caught in a compromising situation with the earl, Rose never forgot the sensation of her first kiss. She hasn’t seen or heard from Lord Sinclair in the years since. Rose is surprised when she sees him at her godmother’s house party, not realizing that he is her godmother’s great nephew. Upon their first meeting since “The Incident”, Sin tells her his plans for revenge.


“We have three weeks together, Miss Balfour. During that time, I shall seduce you. And you—” He let his hand drift from her cheek to her neck, to the fascinating hollows that harbored the wild flutter of her heart. “You will make up for the mockery I’ve had to endure since our last meeting.”


Sin didn’t know whether to laugh or—hell, he didn’t know what to do. “Miss Balfour, you seem to be suffering under the illusion that you have a say in the matter. I will not attempt to seduce you, I will do it.”


She smiled kindly. “We will see, won’t we? Meanwhile, feel free to seduce away. At the least, it will give you something to do other than moan about the past, which you seem sadly given to.”


These two constantly go at it and neither one likes to give in. This leads to plenty of witty repartee, which I love! The more time Sin and Rose spend in each other’s company, the more they discover what makes the other tick. Sin learns that Rose has always taken care of others and rarely does things for herself. Rose finds out just how much “The Incident” hurt Sin and why he is so cynical. They also realize how much they are alike and their opinions of the other slowly begin to change.


Six years ago, had anyone told Sin that he and Rose had far more in common than anyone else he’d ever met, he would have mocked the idea. But the more time he spent with her, the more he recognized her independent spirit and appreciated her strength. Neither of them enjoyed being told what to do, and neither liked to lose.


She was so different from what he’d assumed all those years ago. He’d expected a hothouse bloom. Instead, he found a much more ragged, and far more interesting, wild Scottish rose.


How to Capture a Countess is classic Karen Hawkins! I have been a long-time reader of her books and this book reminds me of her earlier works which made me fall in love with her writing. This one is a straight historical romance—no villains, curses, or magic in sight—and features Ms. Hawkins’s trademark humor and snappy dialogue. I was completely entertained from beginning to end. I thoroughly enjoyed Sin and Rose’s battle of wits and the hilarious machinations of the meddlesome Duchess of Roxburghe. I can’t wait to see what schemes she’ll come up with in the next book! And I absolutely cannot forget to mention her adorable pugs with their equally adorable names—so cute! If you love witty historical romance, don’t miss this one! I highly recommend it!

Email ThisBlogThis!Share to TwitterShare to FacebookShare to Pinterest
Labels: 4.5 Star Review, Andrea, Historical, How to Capture a Countess, Karen Hawkins