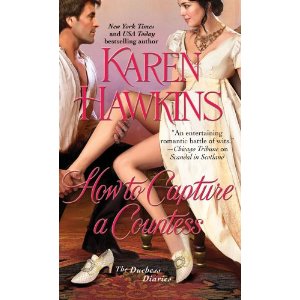 Karen Hawkins takes readers back to Scotland with her new historical romance, How to Capture a Countess, the first book in her new Duchess Diaries series (out September 18).  Here's a sneak peek excerpt!


God, she tasted of sunshine and heat. Had she tasted this good when he'd kissed her six years ago, too? The thought was barely coherent over the thundering of his own blood. He tasted and teased her, and she responded instantly, so that he, in return, was tempted and tormented.
Suddenly, he knew that it was exactly as it had happened all those years ago: he’d touched her and something primal and heated beyond anything he’d ever experienced had roared through his blood. Just as it was doing now.
She moaned against his mouth and he gloried in her submission, in how she opened to him like a bud under a hot sun. With an eagerness he couldn't contain, he answered her silent plea.
Rose thought she would drown in her own madness: her entire body was aflame as she responded to delicious kiss after delicious kiss. She moved against him, restless and unable to think of any reason to stop. How could something so wonderful, so overwhelming, so incredibly perfect be wrong in any way? His touch was exactly as she remembered, passion and instant heat.
She opened her hand to grasp his lapel and as she did so, something slipped from her fingers. My book! Rose instinctively broke the kiss and grabbed for her book.
Thunk!
The book hit the floor just as her forehead smacked Sin squarely in the chin.
She closed her eyes and slapped a hand over her forehead. Bright colors flashed behind her eyelids and she clenched her teeth against the pain. “Ow, ow, ow!”
Silence met her gasped agony. After a moment, Rose cracked open her lids to see Sin rubbing his chin, a thin trickle of blood showed between his fingers. “Oh no!” she said. “I’m so sorry, but I dropped my book and I didn’t think—your chin is—“
“It’s but a scrape,” he said curtly.
Stung by his tone and deeply embarrassed, she snapped back, “It was a bad idea to hold a conversation on a ladder -- as I told you repeatedly.”
Despite the pain of his chin, Sin lifted his brows. “I wouldn’t exactly call what we were having ‘a conversation.’”
Her face turned a lovely pink. “It started out as one,” she said, suddenly prim. “It’s dangerous being on this ladder, especially in skirts, which is why I tried to convince you to talk in the chairs by the fireplace, but nooooo, you had to talk here.“ She shook her head. “What were we thinking? Here, I have a kerchief. Let me wipe your chin for you—” She twisted to reach into her pocket. As she did so, her shoulder mashed Sin’s fingers against the ladder.
He instinctively jerked his hand free. The second he let go, he knew his mistake, but it was too late and he was already falling from the ladder, the floor rushing up to meet him . . .

HOW TO CAPTURE A COUNTESS will be available for sale and download on September 18th.  Karen is giving away a $20 gift card to the online bookstore of your choice for one randomly chosen person who leaves a comment. Enjoy!

Email ThisBlogThis!Share to TwitterShare to FacebookShare to Pinterest
Labels: How to Capture a Countess, Karen Hawkins, PJ, Sneak Peek