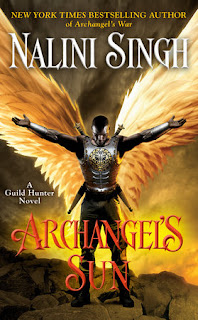 Archangel’s Sun is the thirteenth installment of Nalini Singh’s popular Guild Hunter series. If you’re not familiar with this series, this is a good starting point. The prior book concluded a long arc. Archangel’s Sun picks up in the aftermath of that and contains enough information about the prior storyline to allow readers to follow the action in this book without confusion.

That said, Singh does a great job through the series of developing arcs and exploring relationships in depth. The Archangel of New York, Raphael, and his Guild hunter, Elena, met in the first book, Angels’ Blood. Many of the subsequent books, though not all, explore the evolution of their relationship against the backdrop of an extended arc that slowly builds to a dark crisis point.

Just so we’re all on the same page, archangels in this world are the most powerful members of the angelic race who inhabit the earth. They are not heavenly angels, and the series doesn’t involve religion. The world is ruled by a Cadre of (ideally) 10 archangels. The world also includes angels, vampires, and humans. The Guild is an organization of human hunters. They track down vampires who have gone rogue and started killing indiscriminately or who have skipped out on their service contracts, which they agree to as payment to the angel who turns them into vampires.

Singh also excels at including future heroes and heroines as minor characters often enough to have readers interested by the time those characters step to the fore. So it is with the hero and heroine of Archangel’s Sun. Titus is the Archangel of Africa. He played a big role in the war that just ended. Sharine is the mother of one of the world’s most popular angels and a renowned artist. The prior books contain numerous references to her. As a result of the seeding Singh did along the way, picking up the book is like giving acquaintances a chance to become friends.

When the current story opens, Titus is trying to clean up the mess made of Africa in the last war, which involved zombies. Known as reborn, they can infect others with their bites and turn them into zombies too. The war ravaged the land, and the reborn infest it, killing anyone who comes within range.

Titus has his hands full, so Rafael sends him Sharine to help. Because of a series of traumatic shocks, she has been living mostly in her own mind, her memories fractured, for centuries. When we meet her here, however, she has made great strides in returning to herself. She is no longer the fragile, ethereal artist angelkind considers a treasure to be protected. Instead, she’s intelligent, competent, and assertive.

Singh does a great job of playing off the reality of Sharine with Titus’s expectations. When he learns Sharine is coming, he wants to curse. He thinks Raphael has sent him an additional responsibility, a famous but delicate creature he’ll need to coddle and protect. The reality is very different and offers several wonderfully humorous episodes as expectations and reality clash. Singh also draws humor from technology. Neither Sharine nor Titus has adapted to modern tech, and their unfamiliarity with it offers occasional amusement as they learn how it can benefit their tasks.

Sharine knows Titus by reputation only. He’s considered to be a fierce warrior but a ladies’ man. He has also, thanks to his booming voice, scared away many of the angels sent to help him. Sharine also had to learn to see past the surface impressions to the dedicated, complex, and loyal angel underneath.

As they work together to clear the reborn from his lands, each discovers unsuspected qualities in the other that lead first to respect, then to friendship, and then to much more. Along the way, however, they learn that the former lord of northern Africa, a specialist in creating diseases, had more nasty surprises in store when he died in the war that has just ended. Dealing with the situations they discover raise ethical concerns and new fears.

Sharine’s efforts to pull her true self out of the fragile, ethereal Hummingbird are admirable and relatable. She grows into her true self throughout the book, but it isn’t always easy. Titus learns to deal with someone who, despite his superior rank, isn’t impressed and always says what she thinks. They grow as individuals and then together in an engaging and sympathetic way.

The story moves at a good pace, and the worldbuilding, as always, is layered and original. Singh has created a world sufficiently complex to let her add to it without jarring the reader. The action scenes are clearly depicted and gripping.

With sympathetic characters, an original plot, and a great mix of action and emotion, Archangel’s Sun is highly recommended.