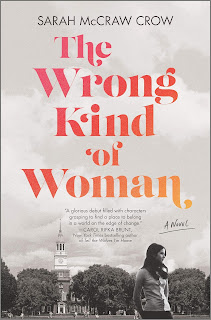 In late 1970, Oliver Desmarais drops dead in his front yard while hanging Christmas lights. In the year that follows, his widow, Virginia, struggles to find her place on the campus of the elite New Hampshire men’s college where Oliver was a professor. While Virginia had always shared her husband’s prejudices against the four outspoken, never-married women on the faculty—dubbed the Gang of Four by their male counterparts—she now finds herself depending on them, even joining their work to bring the women’s movement to Clarendon College.Soon, though, reports of violent protests across the country reach this sleepy New England town, stirring tensions between the fraternal establishment of Clarendon and those calling for change. As authorities attempt to tamp down “radical elements,” Virginia must decide whether she’s willing to put herself and her family at risk for a cause that had never felt like her own.Told through alternating perspectives, The Wrong Kind of Woman is an engrossing story about finding the strength to forge new paths, beautifully woven against the rapid changes of the early ’70s.
PJ's Thoughts:
Virginia is a product of her upbringing. Setting aside her own dreams when she married, she's spent the past several years supporting her husband as he pursues his academic goals and mothering their daughter. But suddenly, she's a 39-year-old widow in a patriarchal society on the cusp of upheaval. Where does she belong? How does she move forward without her husband? Who are her allies? With a 13-year-old daughter to protect and her financial security in the hands of men fighting to maintain the status quo, will she once again sacrifice herself for others or, this time, will she finally find her own voice? I found the character of Virginia very compelling and her journey, both insightful and realistic.
Set against the turbulent landscape of the early 1970's, Sarah McCraw Crow has penned a thought-provoking debut novel about vividly portrayed, complex characters searching for their place in a changing world. Choosing a college campus for her setting was inspired as it provides a microcosm of what was happening across the United States at the time. It also allows for an organic intersection of characters that may not have so easily happened were it not for the classes and activities that naturally occur on campuses.
I found the character of Sam particularly compelling. A brilliant but socially awkward college student struggling with the dissolution of his parents' marriage and his father's subsequent remarriage and new baby, his Jewish religion in a small, predominantly Christian school, and his internal struggles with his sexuality, he was ripe for the picking by those who did not have his best interests at heart.
Virginia's daughter also is an interesting character, dealing with her father's death, the upheaval of her home life, confusing changes in her mother, and the hormonal challenges of most young teen girls. I have a feeling the author has, at some point, probably lived with a 13-year-old girl.
The secondary cast of characters, especially the Gang of Four, highlight the hope, frustration, fear, and dedication of the women of this time who put everything on the line to fight for equality, and in many cases, basic human rights. They are fully developed characters who bring authenticity to the story.
I was a 19-year-old college sophomore in 1970, living with riots, sit-ins, campus streets occupied by armed National Guard, a National uneasiness, and, among females, growing frustration with a woman's place in society. It was a time of confusion, a time of upheaval, a time when a courageous segment of our female population began to take a stand, and a time that Sarah McCraw Crow has indelibly captured in The Wrong Kind of Woman.
~~~~~~~
Sarah McCraw Crow grew up in Virginia but has lived most of her adult life in New Hampshire. Her short fiction has run in Calyx, Crab Orchard Review, Good Housekeeping, So to Speak, Waccamaw, and Stanford Alumni Magazine. She is a graduate of Dartmouth College and Stanford University, and is finishing an MFA degree at Vermont College of Fine Arts. When she's not reading or writing, she's  probably gardening or snowshoeing (depending on the weather).
Buy Links:
Amazon
Barnes & Noble
IndieBound
Books-A-Million
Google Play:
Posted by pjpuppymom at 6:00 AM