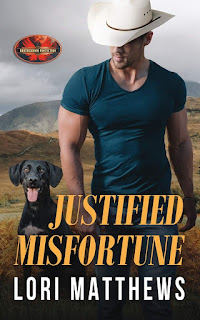 Hudson Riggs has returned to his family’s ranch after years spent traveling the world. The former Navy SEAL accepted a position as a Personal Security Specialist, a job that didn’t leave much free time. He never expected his visit to his hometown to turn into another job. His former High School flame has been arrested for murder but Hudson’s gut instinct is she didn’t do it. All he has to do now is prove it.For Sunny Travers, being back in Canyon Springs is bittersweet. She desperately misses her life in California but her grandmother needs her. Sunny’s world flips upside down when she’s arrested for killing the local hero. Now the citizens of Canyon Springs have turned against her and she’s forced to accept help from the man who broke her heart all those years ago.Hudson knows Sunny hasn’t forgiven him. Hell, he hasn’t forgiven himself for how he left things but all his emotions take a back seat when someone tries to kill Sunny. Can Hudson protect Sunny long enough to apologize to her and right old wrongs or will the killer get to her first?
PJ's Thoughts:
This second-chance romance may be a quick read but it's filled with all the danger, passion, and unexpected twists that make Lori Matthews one of my favorite new romantic suspense authors. From beginning to end, she reeled me in and kept me eagerly flipping pages as the danger ramped up and the stakes got higher and higher.
Matthews created two main characters who are realistic, relatable, and with whom I established an emotional connection almost immediately. Both Hudson and Sunny are multi-layered, complex individuals, neither of whom are all that thrilled to be back in their hometown. Their past history is only the tip of that complicated iceberg. Add in the fact that Sunny has been arrested for murder and it appears Hudson is the only one who is able, or willing, to keep her safe and try to prove her innocence, and the emotional powder keg simmering between them becomes all the more volatile.
As with each of Matthews' books to date, I was on the edge of my seat for most of this novella, trying to figure out what would happen next. I did figure out a few things ahead of time but the author still had more twists in store that were a total surprise. Matthews is very good at that.
This is Lori Matthews' first story set within the Brotherhood Protectors World. I don't know if she plans to write more but I'm hoping she will. There's a secondary character in this one begging for his own story. Or maybe, I'm the one doing the begging. ;-)
Posted by pjpuppymom at 12:30 AM