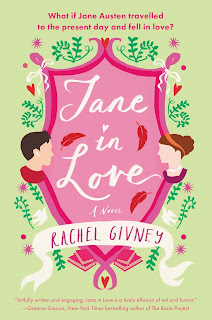 A charming, romantic debut novel in which Jane Austen, heralded author, ends up time-traveling almost 200 years in the future. There she finds the love she's written about and the destiny she's dreamed of...but is it worth her legacy?

Bath, England, 1803. At 28, Jane Austen prefers walking and reading to balls and assemblies; she dreams of someday publishing her carefully crafted stories. Already on the shelf and in grave danger of becoming a spinster, Jane goes searching for a radical solution—and as a result, seemingly by accident, time-travels. She lands in...

Bath, England, present day. The film set of Northanger Abbey. Sofia Wentworth is a Hollywood actress starring in a new period film, an attempt to reinvent her flagging career and, secretly, an attempt to reinvent her failing marriage. When Sofia meets Jane, she marvels at the young actress who can’t seem to "break character," even off set. And Jane—acquainting herself with the horseless steel carriages and seriously shocking fashion of the twenty-first century— meets Sofia, a woman unlike anyone she’s ever met before. Then she meets Fred, Sofia’s brother, who has the audacity to be handsome, clever, and kind-hearted.

What happens when Jane, against her better judgement, falls in love with Fred? And when Sofia learns the truth about her new friend Jane? And worst of all, if Jane stays with Fred, will she ever achieve her dream, the one she's now seen come true?

I confess I started writing this review before I even finished the book. I also confess I committed the egregiously grave sin of reading the last pages to make sure the ending would be satisfactory. I confess the last time I loved a book so much that I was telling everyone about it and insisting they read it before I was even a third of the way finished, it was the book written by the author who is featured recommending this book on the cover, Graeme Simsion, who wrote The Rosie Project. I confess myself utterly charmed from beginning to end with this story, which when one dives into the world of Jane Austen spin-offs, they are a bit like wish-fulfillments of what we wished had happened. In this regard, this love letter to Jane Austen the author is the kind of wish fulfillment I can get behind. While by no means is “finding a man” the be-all and end-all of happiness, for the author who gave us six near perfect love stories, we do wish she had been able to find that sort of happiness for herself too. In this book, she does (to an extent) and it is as witty and delicious and comical as if Jane had composed it herself.

I enjoy a good time travel romance--tropes ebb and flow in popularity and I do hope to see more time travel in my future reads--and Jane Austen makes the perfect fish out of water in modern day Bath and London. The author does not make Jane Austen a modern heroine--she is quite in keeping with her time period and social mores, which I appreciated more than I can put into words. The modern characters, Sofia Wentworth and Fred Wentworth are delightful, the former an aging movie star wanting to win her husband back (or does she really? I mean, he’s a real asshat in my book) and the latter a history teacher who thinks this Jane Austen wannabe is taking advantage of his dear sister. We also have this handsome librarian who is very helpful and not at all an asshat who I think deserves his own happy ending.

Urgency commences when Jane’s books start disappearing from modern time (first Persuasion, then Sense & Sensibility? Oh my! My favorite Alan Rickman movie erased for all time? Jane MUST return!) and Jane is unable to figure out how to reverse the spell to get back to her own time. Further complicating her issues is the fact she is falling more and more in love with Fred. A choice between love in a future (that may or may not exist the longer she stays and things keep disappearing) or returning to her own time and becoming the woman we all know and love? A very modern dilemma: career or love? Still...I think Ms. Givney does an excellent job of giving us both, really, and giving us the wish fulfillment we all dreamed for Jane Austen. I think Jane may even give her own nod of approval from The Other Side, or at least enjoy the social critiques similar to her own for the modern era.

For me, this is a 5 star, Top Dish, and definitely going on my Keeper Shelf (next to The Rosie Project, incidentally.) That said, those who are purists when it comes to romance will be left a bit cold at this story because when taken at its parts, this is much more a women’s fiction/fantasy than romance (i.e. the guy always gets the girl, the story is primarily about the two getting together and overcoming their hurdles), but I quite enjoyed the feminist themes and didn’t mind that the romance was rather secondary. Or that the more engaging romance wasn’t even between the “primary” characters--since some of the other characters seemed to have better romance trajectories. I know some may take issue with the implication that this book is suggesting women can’t have it all, that the story is forcing a choice that doesn’t have to be made. Haven’t we grown up with “Women can have it all”? We can--at least eventually, I say--but I would also say we can’t have it all at the same time. And still...as women, we know when we’re juggling so many tasks, some things have to be let go, and usually the easiest ones of those to drop are those things we do for ourselves, like writing or making art...and I think that is a conundrum explored in this book. Besides, I think those who are successful at juggling all the tasks do have spouses in their lives who support them in honoring that part of their lives, help them create the space for it, and if you do find someone who loves you enough to get out of your way and let you do what you love, isn’t that the real thing? Isn’t that the true love we all hope for ourselves? I think that is the moral of the story in the end.