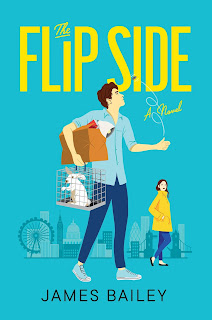 To coin a phrase, Josh is suffering a quarter-life crisis. He just broke up with his long-term girlfriend, lost his job, and moved back home with his parents (shudder). Welcome to rock bottom in Bristol. As Josh starts questioning all his life choices, he has a mad thought: Maybe he would just be better flipping a coin. After all, careful planning has landed him homeless, jobless, and single.

What starts as a joke soon becomes serious and Josh decides to start putting his faith in the capriciousness of currency. He doesn’t have anything to lose.

But when the chance of a lifetime and the girl of his dreams are on the line, will the coin guide him to a rich love life or leave him flat broke?

The Flip Side is a lighthearted, humorous romcom with a side of sweet romance and a cast of interesting characters. At the beginning of the story, Josh is not what I would call a strong male lead - at times, it feels like he's twenty-eight going on fourteen - and yet he's oddly endearing and I found myself rooting for him. He has yet to choose a career or really see any project he undertakes through to completion, as his friends point out to him repeatedly. After his proposal to his long-time girlfriend goes horribly awry and he finds himself back home with his loving but annoyingly intrusive parents, it's almost understandable that he would turn his decisions over to the flip of a coin. The story follows him through a full year of flipped decisions with consequences that range from cringe-worthy, to sweetly endearing, to outright hilarious and, finally, to a potentially life-altering decision that he just may need to make for himself instead of relying on the coin. I enjoyed his adventures, the excitement, the heartbreak, and the growth he experienced along the way.

The secondary cast is quite the interesting collection. My favorite secondary character was Josh's grandfather. The relationship between Josh and his Pap really touched my heart. I found the dynamic among Josh and his friends to be realistic and entertaining. Josh's parents walked a fine line between character and caricature, injecting a fair amount of humor into the story though they started to wear on me after a while. I'm guessing some of that may have to do with the fact that I'm American and the setting, characters, and humor in this book are profoundly British.

The story travels from England to the Continent and I really enjoyed the author's spot-on descriptions of both settings and residents of Amsterdam and Paris. It was a bit like taking a European tour without leaving the comfort of your home.

Josh's romantic thread is not the primary facet of this story but, when we get to it, adds a touch of emotional depth and sweetness. I admit, I was expecting that thread to weave in a different direction but was ultimately satisfied with the path the author chose to take.

Most of the romcoms I've read are told from a predominantly female perspective so having this one be from a male perspective was refreshingly original. If you enjoy lighthearted British humor with a touch of romance give The Flip Side a try.