Review - - In the Wrong Sights 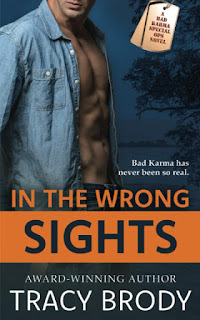 Cassidy O’Shea overheard what should have been a patient’s deathbed confession—except the cartel hitman lived. She’s lost two years of her life being in witness protection, but nothing will stop her from attending the funeral of Hal, her ex-stepfather and the only father figure she’s ever known. Except her quick trip to Fort Bragg is exactly what an assassin hoped for.

Learning his Special Ops mentor was murdered, AJ Rozanski’s suspicions turn to Hal’s mysterious stepdaughter who appeared at the funeral. He’s stunned to learn her testimony is needed to bring down the head of a major arms cartel. When the marshals request the Bad Karma team’s aid to persuade Cassidy to stay in the Witness Protection program, AJ is determined to convince her to do the right thing—and to find Hal’s killer. He’s supposed to be protecting her, not falling for a woman he may never see again.

A PAWN IN THE JUSTICE SYSTEM

An attempt on her life sends Cassidy to the only people she trusts—and back into AJ’s arms. His team sets a trap for the assassin who killed Hal, but that won’t end the threats to Cassidy and her family. The only way to escape spending her life in WITSEC is for the hitman she helped save to testify against the head of the arms cartel, except he’s not motivated to talk. Can she outlast and outwit him in a deadly game of survival?

If you enjoy military romantic suspense, you should definitely be reading Tracy Brody. With her strong characterization, military knowledge, intricately-woven suspense, and action-packed stories, she's an author who has steadily climbed my list of romantic suspense favorites with each book she's published.

As with the previous books in her Bad Karma series, In the Wrong Sights pulled me in from the beginning and kept me on the edge of my seat until the very end. Brody has yet to write a book I've been able to put down.

Cassidy and AJ are so vividly depicted. I felt an immediate connection with both of them, which made their perilous journey, and unanticipated feelings for one another, all the more intense.  Cassidy, in particular, elicited deep emotional responses in me. Unforeseen circumstances snatched her from her happy, successful life and embroiled her in a whirlpool of life-threatening danger that threatens to pull her under. She's so realistic, so relatable that I couldn't help but put myself in her shoes and feel every ounce of her frustration, fear, anger, and determination to take back her life. AJ and his fellow Bad Karma soldiers are called in to protect her and, of course, they're up to the challenge but this is no easy fix. The bad guys are really bad and Brody takes the reader on a harrowing thrill ride before we reach the very hard-won happy ending. I was with them every step of the way.

In the Wrong Sights is the 4th book in Brody's Bad Karma series and while there will be many familiar faces for fans of the series, the book stands well on its own. Having said that, however, I do enthusiastically recommend all the books in the series.