Review - - How to Catch a Queen 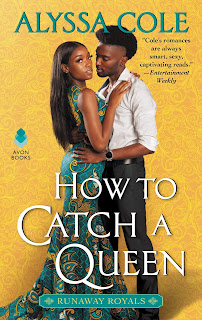 When Shanti Mohapi weds the king of Njaza, her dream of becoming a queen finally comes true. But it’s nothing like she imagined. Shanti and her husband may share an immediate and powerful attraction, but her subjects see her as an outsider, and everything she was taught about being the perfect wife goes disastrously wrong.

A king must rule with an iron fist, and newly crowned King Sanyu was born perfectly fitted for the gauntlet, even if he wishes he weren’t. He agrees to take a wife as is required of him, though he doesn’t expect to actually fall in love. Even more vexing? His beguiling new queen seems to have the answers to his country’s problems—except no one will listen to her.

By day, they lead separate lives. By night, she wears the crown, and he bows to her demands in matters of politics and passion. When turmoil erupts in their kingdom and their marriage, Shanti goes on the run, and Sanyu must learn whether he has what it takes both to lead his people and to catch his queen.

If you haven't yet read Alyssa Cole you're missing out on some of the best writing in romance fiction. I loved her Reluctant Royals series and was excited when I learned she would be expanding that world into her new series of Runaway Royals. How to Catch a Queen launches that new series and is everything I could have hoped for.

Shanti was the star of this book for me. Here is a woman who identified her life goal at an early age and since then has diligently prepared herself for the role of her dreams: to be a queen. Not for the crown or the jewels or the pampered lifestyle. No, Shanti has no intention of being any handsome man's arm candy. A brilliant strategist, she is prepped, polished, and ready to stand next to her King and, together, lead their country - and citizens - into a prosperous future. Unfortunately, her new husband doesn't want to be a king, or a husband, her new country is falling apart, progress is being undermined at every turn, the royal council ignores her and her ideas, and if she doesn't turn it all around within four months, she's out the door with several new queen applicants on RoyalMatch.com waiting to take her place.

While Shanti had me cheering all her boss queen moves, Sanyu tugged on all my nurturing heartstrings. I ached for the absence of emotional nurturing in his life and was ready to exact justice for a lifetime of emotional abuse. He has a significant growth arc that Cole slowly and realistically navigates with sensitivity and care. But he isn't the only one who grows. Shanti also has lessons to learn. I enjoyed watching the two of them ease into friendship, "teamship," and more. But I also enjoyed watching each of them individually open themselves up to the possibility of new friendships with others. The group texts with familiar characters from the previous series were wonderfully fresh, funny, and eye-opening for both Sanyu and Shanti. I loved them!

Cole brings the kingdom of Njaza to life, including it's history, traditions, challenges, geographic landscape, and, of course, it's citizens. She explores many relevant topics including colonialism, patriarchy, social justice, mental health, and the difficulty of balancing necessary progress with historical tradition. The secondary characters are rich, relevant, and necessary to both the progression of the story as well as the growth of the hero and heroine. No wallpaper here. There are several secondary characters who elicited strong emotions (both positive and negative) in this reader. I would have liked a more detailed reckoning for one of them but I'm willing to believe that a lot of discussion, accountability, apologizing, and healing occurred in the five years prior to the epilogue. There's also another character who, though she had a small role, leaped from the page and stole every scene she was in. I'm so excited that Cole's 2021 release, How to Find a Princess will be her story!

There's so much more I could say about this book but that would be giving away details readers should have the pleasure of discovering themselves. If you haven't read Alyssa Cole yet, How to Catch a Queen is a great place to begin.

Have you read any Alyssa Cole books yet? Do you have a favorite?

Would you want to be a queen? Why? Or, why not?

What are you reading this week?

One randomly chosen person posting a comment before 11:00 PM, December 1 will receive a print copy of A Duke by Default by Alyssa Cole.