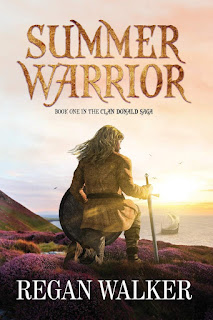 Somerled’s parentage was noble, of the Kings of Dublin, the royal house of Argyll and the great Ard Ri, the High Kings of Ireland. But when the Norse invaded Argyll and the Isles, his family’s fortunes fell with those of his people. All hope seemed lost when he rose from the mists of Morvern to rally the Gaels, the Scots and the Irish.Sweeping across Argyll and the Isles like a fast-moving storm, brilliant in strategy and fearless in battle, Somerled began retaking his ancestral lands, driving away the invaders and freeing the people from the Norse stranglehold. In doing so, he would win the title Somerle Mor, Somerled the Mighty, Lord of Argyll, Kintyre and Lorne and, eventually, Lord of the Isles.This is the unforgettable story of his path to victory that forged the Kingdom of the Isles and won him the heart of a Norse king’s daughter.
PJ's Thoughts:
One of the things I most enjoy about a Regan Walker book is her impeccably researched historical detail and authenticity. That research is abundantly evident in this new novel inspired by the life of Somerled, a real person who played a pivotal role in the 12th century lives of the Gaels, Scots, and Irish.
While key facets of Somerled's life are recorded such as his birth, death, marriage, children, etc., many details are unknown. Using imagination based upon research, Walker has penned a story that takes readers back to medieval times, bringing real people and fictional characters to life. Through well-developed characters and events, she offers insight into their way of life, including goals, obstacles, and emotions as they might have occurred.
Using a narrative style, Summer Warrior unfolds in an intriguing and effective way that draws the reader into the lives of the characters and the time in which they lived. Reading the book was reminiscent of sitting around an open campfire, listening to a master storyteller weave tales from days of yore.
If you enjoy sagas rich in historical detail and authenticity, Regan Walker is an author I highly recommend.
Posted by pjpuppymom at 2:30 AM