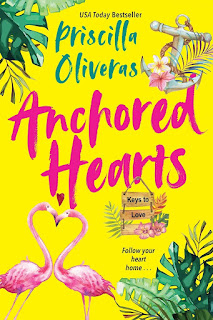 Award-winning photographer Alejandro Miranda hasn’t been home to Key West in years—not since he left to explore broader horizons with his papi’s warning “never to come back” echoing in his ears. He wouldn’t be heading there now if it wasn’t for an injury requiring months of recuperation. The drama of a prodigal son returning to his familia and their beloved Cuban restaurant is bad enough, but coming home to the island paradise also means coming face to face with the girl he left behind—the one who was supposed to be by his side all along . . . Anamaría Navarro was shattered when Alejandro took off without her. Traveling the world was their plan, not just his. But after her father’s heart attack, there was no way she could leave—not even for the man she loved. Now ensconced in the family trade as a firefighter and paramedic, with a side hustle as a personal trainer, Anamaría is dismayed that just the sight of Alejandro is enough to rekindle the flame she’s worked years to put out. And as famillia meddling pushes them together, the heat of their attraction only climbs higher. Can they learn to trust again, before the Key West sun sets on their chance at happiness?
PJ's Thoughts:
In this second book of the Keys to Love series, Oliveras brings readers an emotionally gratifying story of heartbreak, mending fences, and second chances, all set within the lush, tropical, southernmost point in the United States: Key West.
Anchored Hearts is more than a second chance at romance for first loves, Alejandro and Anamaria. It's also a chance to repair the deep and longstanding rift between Alejandro and his father. I enjoyed the slow-burn romance between the childhood sweethearts. Oliveras takes her time with them, slowly reigniting their friendship before gradually moving them into a new relationship indicative of the adults they now are and the individual journeys they've traveled over the past ten years. There are too many past hurts and misconceptions to overcome before a new romance can begin. Although, of course, the meddling mamas are in full-speed matchmaking mode from the beginning. They've already plotted the outcome; they just need their two stubborn children to get on board.
In many ways, the rift with Alejandro's father is deeper and even more difficult to repair than that between the former lovers. Oliveras delves deep into the fabric of this Cuban-American family that shows love through their language, their food, their close family ties, and their rich cultural heritage. The way she highlights the differences between generations is at times heartbreaking but also indicative of what occurs in many immigrant families when a second-generation child veers from the course his family has set for him. The resolution scene between younger and older generation is one of the most emotional in the book and had me reaching for more than a few tissues.
In the first book of the series, Oliveras shows us Key West through the eyes of a tourist. In Anchored Hearts, she brings the tiny island to life through the eyes of those who have called Key West home - - through her own eyes. I could feel the tropical breezes, the sun on my skin, the sand between my toes, and the beauty of the sunsets people gather to toast every night. But she also evoked memories of quiet residential streets, family-run restaurants where everyone knows your name, and the love and pride locals hold in their hearts for their little piece of paradise.
This is a book that made me laugh, sigh, cry and eagerly anticipate the next book in the Keys to Love series. Until I can actually travel to Key West again, I'll happily revisit through the heart-tugging stories brought to life by Priscilla Oliveras.
Posted by pjpuppymom at 12:30 AM