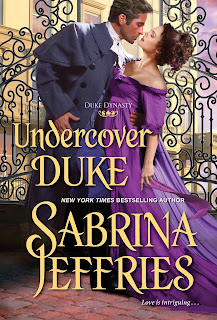 Along with his stepsiblings, Sheridan Wolfe, Duke of Armitage, is determined to finally solve the mysteries behind the suspicious deaths of their mother’s three husbands. Tasked with investigating a possible suspect, Sheridan finds himself in dangerous proximity to her captivating daughter, Vanessa Pryde. But still haunted by a tragically lost love, the duke is resolved to resist the attraction—and avoid any “scheming” husband-hunters. Besides, lovely Miss Pryde seems utterly smitten with a roguish London playwright . . .
Vanessa thinks a little scheming may be in order—for it’s Sheridan she truly has her sights, and her heart, set on. Her theatrical flirtation is intended only to break through his business-like demeanor and guarded emotions. And as Sheridan’s jealousy becomes aroused, the two soon find themselves propelled into a scheme of an altogether different kind, involving a pretend engagement, a secret inquiry—and a perhaps not-so-secret leap into true love . . .
PJ's Thoughts:
Creating families is one of the things Sabrina Jeffries does exceptionally well and that skill is on full display in this book. While quiet, serious Sheridan takes the lead in this final book of the Duke Dynasty series, his siblings - and their spouses - are all nearby to add their own brand of sibling rivalry, teasing, unsolicited advice, and assistance as the one they call "Saint Sheridan" navigates his own not-so-smooth journey to love.
Usually, by the end of a series, I have formed an impression of all the main characters but not so with Sheridan. It was enlightening to watch him emerge from his quiet, all-business demeanor and show us the roiling emotions lurking beneath the surface. There's so much more to him that I had anticipated. And it's especially delicious to watch Vanessa set it all into motion by ruffling his feathers so delightfully. As much as I've enjoyed the heroes in this series, I've enjoyed the heroines more. Each of them is strong, determined, resourceful, and someone I'd love to call my friend and Vanessa is no exception. I adored her, supported her, and wanted to toss her horrible mother off a cliff. She and Sheridan have undeniable chemistry, even if it's reluctant chemistry on one side. But watching that reluctance crumble and then slowly build into something deeper, stronger, and everlasting is the fun of a well-written romance, no?
Another facet of many of Jeffries' series is a well-crafted mystery that runs through all of the books. In this series, the siblings have been working to uncover the truth behind the deaths of their mother's three husbands, men they've come to believe were murdered. Jeffries is a master of twists and turns, keeping me guessing as to the identity of the killer throughout much of the series. I finally landed on the right suspect during Undercover Duke but I had no clue as to the person's motive until it was revealed by the author in an intense, life-or-death scene. I love when an author can accomplish that.
The sweet, funny epilogue wraps everything up with a lovely, sentimental bow that had me laughing, crying, and happy for the time spent with this family. The only character left standing outside this happy circle of romantic bliss is celebrated (fake) playwright, Konrad Juncker. His story will be told in the novella, "When We Finally Kiss Goodnight," as part of the holiday anthology, A Yuletide Kiss, due out this fall. I'm hopeful it will also include a certain lady's companion from Undercover Duke.
While Undercover Duke can certainly be enjoyed on its own, for the full family (and mystery) experience, I recommend reading the books of this series in order: Project Duchess, The Bachelor, Who Wants to Marry a Duke, and Undercover Duke. 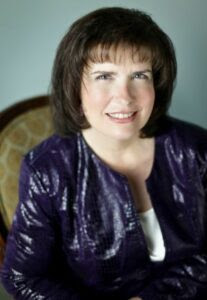 Sabrina Jeffries is the New York Times bestselling author of more than fifty novels and works of short fiction (some written under the pseudonyms Deborah Martin and Deborah Nicholas). Her writing has been published in more than twenty-one languages and there are over nine million copies of her books in print. A four-time RITA® Award-finalist, Jeffries has won the Holt Medallion Award, the Maggie, and the Booksellers’ Best Award. After earning her Ph.D. in English Literature from Tulane University, she chose writing over academics, and now her sexy and humorous historical romances routinely land on the New York Times and USA Today bestseller lists. Sabrina lives in North Carolina with her husband and adult son, who has inspired her to actively champion the cause of autistic children.

Have you been reading the Duke Dynasty series?

Did you guess the identity of the villain?

Which do you prefer: solving the mystery or being outsmarted by the author?

Enter below to win a paperback copy of Undercover Duke by Sabrina Jeffries! Two paperbacks are up for grabs.

The giveaway is open to the US only and ends on June 10th. You must be 18 or older to enter.
Undercover Duke
Posted by pjpuppymom at 8:00 AM