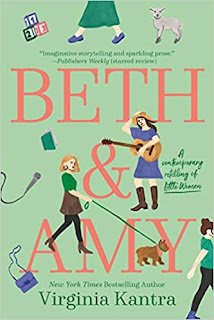 Amy March is more like her older sister Jo than she’d like to admit. An up-and-coming designer in New York’s competitive fashion industry, ambitious Amy is determined to get out of her sisters’ shadows and keep her distance from their North Carolina hometown. But when Jo’s wedding forces Amy home, she must face what she really wants…and confront the One Big Mistake that could upend her life and forever change her relationship with Jo.Gentle, unassuming Beth grew up as the good girl of the family. A talented singer-songwriter, she’s overcome her painful anxiety to tour with country superstar Colt Henderson. But life on the road has taken its toll on her health and their relationship. Maybe a break to attend her sister’s wedding will get her out of her funk. But Beth realizes that what she’s looking for and what she needs are two very different things.…With the March women reunited, this time with growing careers and families, they must once again learn to lean on one another as they juggle the changes coming their way.
PJ's Thoughts:
I've been eagerly anticipating this second book in Virginia Kantra's The March Sisters duet since reading book one, Meg & Jo in late 2019. I mean, how could I not be excited about a book with this first line: "It's always a mistake to sleep with a man who's in love with your sister." I'm happy to say the wait was well worth it.
Virginia Kantra is such a gifted storyteller. Immersing myself into this story and into the lives of the March sisters felt very much like being wrapped in a warm blanket while a beloved grandmother or favorite aunt told me the story of her life. As I followed Beth and Amy from a small farm in North Carolina to Paris, New York City, Nashville, and, finally, back home, these women - their sisters, parents, and the men in their lives - all became more than characters in a book. They became my friends. They earned my affection. I became invested in their lives, their success, their happiness. They became so real to me that I could almost convince myself that they're actually happily living out their lives only a couple hours away.
One of the things that added to the overall richness of this book was how complex and fully formed the characters were, not only the four sisters but the peripheral characters as well. I enjoyed how all four sisters continued to evolve under Kantra's guiding hand, even though the primary focus in this second book is on Beth and Amy. I have to admit that no one was more surprise than I by the fact that Amy, my least favorite character in book one, turned out to be the one whose story arc I most enjoyed in book two and who ended up being my favorite March sister. That's the power of Virginia Kantra's writing.
The chapters that presented the viewpoint of Abby, the girls' mother were a nice bonus. I felt her perspective gave an added depth to the story and I enjoyed her personal journey as well as the evolution of her relationship with her husband. Dan, the veteran who works with the goats on the March farm, was an unexpected surprise with unexpected depths and an unexpected connection with one member of the March family. He ended up being one of my favorite characters. And then there's Trey and his complicated relationship with two of the March sisters. I didn't like him much in Meg & Jo but by the end of Beth & Amy he had become one of my favorites. There was so much more to him than I expected. Kantra did a wonderful job of unraveling the layers that had formed the man he had become. By the end of the book I was fully invested in him, his happiness, and the relationship that was always meant to be.
Fans of Louisa May Alcott's Little Women, Kantra's inspiration for her modern-day March sisters, may be wary of this new book, knowing the tragic outcome for Beth in the original story. Fear not, while Kantra's Beth deals with a life-threatening disorder, her emotional story arc leads her to an uplifting, hopeful, and very much alive conclusion. You can move forward and enjoy this new book without that cloud hanging over your head.
If you haven't read Meg & Jo yet, check out my 5-star review here.
~~~~~~
Have you read Meg & Jo? If so, which sister was your favorite?
I love characters - like Amy - who surprise me. Tell me about a fictional character who recently surprised you.
I'm always on the lookout for books to add to my summer reading list. What book(s) are you most anticipating this summer?
One person who posts a comment before 11:00 PM (Eastern), May 26 will receive a signed, print copy of Meg & Jo.
*Must be 18
*U.S. only
*Void where prohibited
Posted by pjpuppymom at 8:00 AM