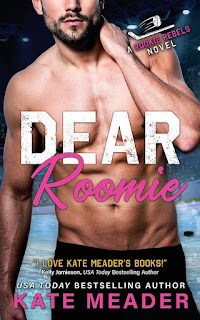 Reid Durand isn't here to make friends.Coming from a legacy of hockey greatness, he has games to win and things to prove. With his focus during his first season as a Chicago Rebel purely on his drive to succeed, every vice is off the table. No booze, no sugar, and definitely no women.Kennedy Clark is the master of the side hustle.She'll walk your dog, brew your espresso, and pick up your dry-cleaning, all while rocking it in Warrior pose. Standing still is impossible for her, because the moment she starts to slow down, it'll come rushing back in a torrent. The memories. The pain. The heartbreak.Their meet-cute is more of a freeze-cute. Besides, they already know each other. He's the rude, entitled customer at her coffee shop, or what used to be her coffee shop since she just got fired--because of Mr. Extra Shot Americano himself.Reid didn't intend to get Kennedy fired.He didn't intend to rescue a dog after the poor thing ended up in the lake.And he definitely didn't intend to acquire a new roommate.A curvy, chatty, tempting roommate.Now this perfect storm of events are about to wreak havoc on his neatly-ordered life.Reid Durand isn't here to make friends, and he's certainly not here to lose his heart to a puppy, a team, or a chaos agent like Kennedy. But then we don't always get what we want...
PJ's Thoughts:
Leave it to Kate Meader to take my least favorite Rookie Rebel, Reid "I don't want to be your friend" Durand, and transform him into my favorite hero of the series. I should have known there was much more to this guy than the rigid lifestyle and snarly, in-your-face demeanor that he's perfected with teammates and opponents alike. All it took to begin chipping away at that hard shell was a half-drowned, one-eyed, skin and bones pup and a "dog nanny" with bubbling, upbeat, positive energy and radiating more sunshine in her personality than...well...the sun. Reid's by-the-book life just got complicated. I adored these two together. Well, I adored them eventually. With Kennedy, my affection happened quickly and continued to deepen as her actions showed her character and loyalty. It took a bit longer to warm up to Reid but once his layers began to unravel (Bucky, the rescued dog started the process - Kennedy finished it), he slowly began to win my heart. And by the time he won over Kennedy - and her grandmother - I was a puddle at his feet.
Kate Meader is one of those authors who never lets me down. Whether her characters hang out at the fire station, in the kitchen, at the hockey rink, or somewhere else, I know going into any book she's written that I'll need a fan (she is a master of sexual tension),  tissues (emotional depth that wrings my heart), and I should never take a drink while reading (some of those zingers are hilarious). In Dear Roomie, she gave me all of the above...and then some. There are a lot of Rom-Com elements to this story but there's also deep emotional baggage that both main characters are hiding beneath the surface. Meader explores some painful topics, such as the lasting effects of verbal and emotional abuse and how traumatic loss at an early age can manifest itself in the way we choose to live and interact with others. Both topics are handled deftly, imparting the gravity and importance of them while keeping the story on a hopeful, upward trajectory.
Side characters add an incredible amount of richness to this book. Grandma Edie is a hoot; I want to be just like her when I reach Assisted Living age. Reid's teammates, along with retired Rebels, and the WAGs (wives and girlfriends) are all along for the ride. I love the camaraderie among this group and the way the men handle their "issues." One particular scene (among the men), conducted in a kitchen with an assortment of cookies, tequila, and copious amounts of unsolicited advice had me laughing and crying in equal measure. I adore these guys. And, please, may we have more of Reid's brother, Bastian? I know he's not a Rebel but he's such a good guy and so deserves a happily ever after of his own.
I enthusiastically recommend adding Dear Roomie to your summer reading list. It's the fifth book in Kate Meader's Rookie Rebels series but can absolutely be enjoyed as a standalone, however, once you meet Reid's teammates don't be surprised if you immediately start searching out their stories too. They really are impossible to resist.
Posted by pjpuppymom at 12:30 AM