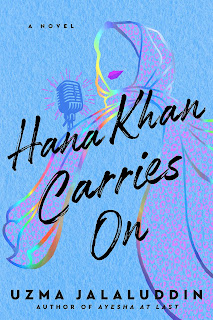 Sales are slow at Three Sisters Biryani Poutine, the only halal restaurant in the close-knit Golden Crescent neighborhood of Toronto. Hana waitresses there part time, but what she really wants is to tell stories on the radio. If she can just outshine her fellow intern at the city radio station, she may have a chance at landing a job. In the meantime, Hana pours her thoughts and dreams into a podcast, where she forms a lively relationship with one of her listeners. But soon she'll need all the support she can get: a new competing restaurant, a more upscale halal place, is about to open in the Golden Crescent, threatening her mother’s restaurant.

When her mysterious aunt and her teenage cousin arrive from India for a surprise visit, they draw Hana into a long-buried family secret. A hate-motivated attack on their neighborhood complicates the situation further, as does Hana's growing attraction for Aydin, the young owner of the rival restaurant--who might not be a complete stranger after all.

As life on the Golden Crescent unravels, Hana must learn to use her voice, draw on the strength of her community and decide what her future should be.

Sophomore books, I think, are challenging. Usually when people love the debut book, the expectations for the second book can be staggering. I loved Uzma’s debut book, Ayesha At Last, which was a twist on Pride & Prejudice and opened my eyes to the hunky Darcy-esque traditional Muslim hero, Khalid. I was eager to read what she had next. This book is equally full of engaging and hilarious characters, and Aydin is hunky in his own right, but as those who are fans of Mr. Darcy, that type of hero is a bit hard to follow. Aydin is a bit of a more handsome Mr. Edward Ferrars, if you will. When I was reading this book, I struggled a bit, but only in the way of “This isn’t as quick a read for me as the first book” which made me think, “Do I like this book? Do I recommend this book?” Ultimately, yes, I do recommend this book, based on its own merits and the strength of Uzma’s writing voice at portraying a quieter, stronger intimacy between her characters which she demonstrated in her first book as well.

The setting of this book features--yes, Toronto is the location--but really it’s You’ve Got Mail meets Crazy Rich Asians (of the Indian variety.) If you pick up this book for no other reason, pick it up for Hana’s crazy aunt Billi (also known as Kawkab Khala), whose secret family story will have you laughing even as you clap for her sheer chutzpah. If you’re like me, you’ll also be googling “how do I make biryani?” and other Indian delicacies that crop up during many of the scenes. As a story about two restaurants, there is a lot of great food at stake.

Our hero, Aydin, is handsome, charming, and kind--the latter which is a fundamental quality Uzma has for her heroes and which I adore. Although one would assume all romance heroes by default are kind, I have been reading romances since I was a mere babe and sometimes what constitutes kindness in a hero is that he mutters reluctantly, “She has fine eyes.” But with Uzma’s characters, kindness is a core value, even in the most crusty of them--and if they’re not kind, they’re definitely that villain, Junaid, who you’ll meet soon enough. Aydin slowly wins over Hana, who is determined not to fall in love with the slick, handsome son of the guy who is trying to put her family out of the restaurant business, and it’s not from his well-meaning business advice, but the small things, things so small you almost don’t notice until they’re all piled before you and you realize, “He really loves her.” Love is all about the little gestures every day, not the big sweeping gestures that happen once in a blue moon.

As most romance novels are ultimately about the heroine’s journey, Uzma completely delivers on another fun, feisty heroine who lives authentically even as she struggles with the challenges of being part of an extended family filled with duty and drama galore. Hana Khan is easy to identify with: a young woman with ambition for her own dreams but who is also a good person who wants to support her family, love her parents, and live and thrive in her community. What I enjoy a lot about Uzma’s books is this offers a real way for someone like me (someone who is white and non-Muslim) to see really what it is like to live as a Muslim woman of color in a community and country where she is the minority and not always welcome even though she was born there. Uzma’s gift is that she answers questions I had about the Muslim community (but was afraid to ask) and also shares a vision of a world where love is love is love. Let me be clear: she shares the Muslim faith as an organic part of the characters, not as a way to push religion on anyone. Learning about the prayers and rituals that are the cultural norms for her characters are just as fascinating as other books in which I’ve read where the characters are Catholic, Native American, or even Wiccan. It always strikes me how much more alike we all are rather than different--which I think is a primary core value of romance novels. I’m sure Uzma’s main readership will be thrilled to see themselves represented on the page, normalized as someone worthy and deserving of a happily ever after. (I know I get excited when I read about small-town bookworms who fall in love with someone way out of their league, only to find out they loved her all along.) Still I see a lot of myself in Uzma’s Hana, in her love of family, desire to be heard in her own authentic storytelling, and having a crazy aunt--so really, I think we’re all Uzma’s readership and we should all read this book.

P.S. And if we’re going to talk about what’s next for Uzma, if we can get a girl for Rashid, I would love that. He was hilarious, darling, and all heart--he deserves a girl who will appreciate his big plans and bigger executions of said plans.