Tour Review - - The Woman With The Blue Star

The Woman With The Blue Star
by Pam Jenoff
Publisher: Park Row
Release Date: May 4, 2021
Reviewed by PJ 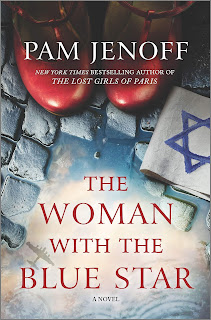 1942. Sadie Gault is eighteen and living with her parents in the Kraków Ghetto during World War II. When the Nazis liquidate the ghetto, Sadie and her pregnant mother are forced to seek refuge in the perilous tunnels beneath the city. One day Sadie looks up through a grate and sees a girl about her own age buying flowers.Ella Stepanek is an affluent Polish girl living a life of relative ease with her stepmother, who has developed close alliances with the occupying Germans. While on an errand in the market, she catches a glimpse of something moving beneath a grate in the street. Upon closer inspection, she realizes it’s a girl hiding.Ella begins to aid Sadie and the two become close, but as the dangers of the war worsen, their lives are set on a collision course that will test them in the face of overwhelming odds. Inspired by incredible true stories, The Woman with the Blue Star is an unforgettable testament to the power of friendship and the extraordinary strength of the human will to survive.
PJ's Thoughts:
Pam Jenoff writes with compassion, meticulously-researched historical detail, and heart-wrenching candor. I have yet to read a book written by her that is less than a 5-star read.
In The Woman With The Blue Star, Jenoff turns her pen to the plight of Polish Jews in the city of Kraków during WWII. While her story is fictional, the characters in the book, and their journeys, are inspired by actual Jews who took refuge in the sewers of a Polish city to escape transport to Nazi death camps.
This is a book that pulled me in from the beginning and kept me glued to the pages. It's filled with danger, suspense, anguish, hope, an unlikely friendship between two young women who live very different lives, and enough twists and turns to keep me on the edge of my seat, wondering what would happen next. Jenoff's words paint an all-too-vivid picture of what life was like for both Sadie and Ella. She brings the streets of a Nazi-occupied city, and a dark, dank, rat-infested sewer, to life; making it all too easy to imagine the fear, desperation, and rage that filled peoples' souls.
Perhaps what affected me the most was the fact that although Sadie and Ella - all the characters, really - were fictional characters, I never stopped remembering that they, especially Sadie and her family, were inspired by actual people who lived, and died, in the horrors of the Holocaust. Jenoff created such fully-developed, relatable young women that it was easy to forget that were not actual people which amped the emotional connection I felt with them even higher. My heart ached for what they endured but also found hope in the fact that because someone found the courage to do the right thing, others were saved and two young women who could easily have become enemies instead found friendship, purpose, an enduring bond, and the will to go on when all seemed lost.
Posted by pjpuppymom at 12:30 AM