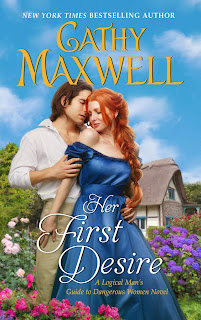 She arrived in town, beautiful and bold and declaring that she’s inherited property that  that he has already claimed! As a member of the local Logical Men’s Society, Ned Thurlowe prides himself on thinking clearly and calmly at all times. And it’s clear that the meeting place of the society—a local tavern—is his even if the men have turned it to shambles.

But Ned’s claim is challenged Gemma Estep, who’s announced she’s decided to turn it into some sort of respectable tea garden for the local ladies. Ned challenges Gemma, and in doing so behaves most illogically, for though he wants to dismiss her, he also can’t help but desire her.

Gemma has had enough of men telling her what to do, and she’s vowed to make her own way in the world. And Ned Thurlowe is ruining her plans. Not only has he laid claim to her property, pitting them in a heated fight for its ownership, he’s also arousing in her feelings she’s never sensed before.

And although they argue, they quickly discover they have more in common than they’d each ever dreamed—could their disagreement be turning into desire?

Her First Desire by Cathy Maxwell is one of this year’s best laugh-out-loud and heart-wrenching romances for 2021. It was a five-star read for me. You need to run out and get a copy, sit back and enjoy the read. Her First Desire is the second book in Maxwell’s A Logical Man’s Guide to Dangerous Woman series. It can easily be read as a stand alone.

Her First Desire follows Ned Thurlowe, one of the founding members of The Logical Man’s Guide to Dangerous Woman and Gemma Estep the woman who is unwittingly about to turn the society and the quaint town of Maidenshop on its ear. Ned, the affable town doctor, leads his society’s meetings and hosts a lecture series at the local tavern The Garland. His dear friend and a father figure Andy, a Society member, always gave him free range there. Gemma comes to Maidenshop to stake her claim to The Garland. Andy, who happened to be her uncle, wrote her shortly before his sudden death stating ‘what’s mine is yours’. Gemma comes to stake her claim and make a clean start away from her dead philanderer of a husband and his family.

A battle of the sexes ensues as the town members take sides. On one are the men of the society - all unmarried - who take great offense to losing their drinking hole, er, meeting place. On the other are the town matrons - a formidable lot - who help Gemma clean up the place. Gemma, a unconventional healer, envisions planting her healing herbs and setting up a lovely tea garden in its place. Not very likely if Ned has anything to say about it.

Sparks fly as Ned and Gemma butt heads but their hearts and an undeniable heat have other ideas for them. I really did laugh out loud many times and cried for more than just Ned and Gemma. There are quite a cast of characters who live and love in Maidenshop. Go on and pay them a visit; you will not be sorry you stopped by. I have always enjoyed Cathy Maxwell’s books. She truly is a national treasure.