Review - - Lady Frederica and the Scot Who Would Not

Lady Frederica and the Scot Who Would Not
by Julie Johnstone
Scottish Scoundrels: Ensnared Hearts - Book 4
Publisher: Darbyshire Publishing, LLC
Release Date: May 10, 2021
Reviewed by PJ 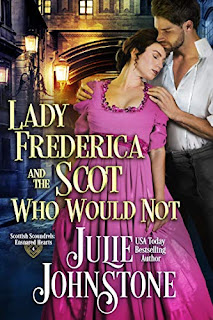 When the guarded King of the Underworld collides with a maddeningly reckless lady, the road to ruination becomes impossible not to take.Lady Frederica Darlington isn’t prim, obedient, or appropriately dispassionate as a proper lady of the aristocracy should be. Nor is she interested in securing a husband, whether rake, rogue, duke, or lord. Freddy wants to live as she pleases in a place she feels she belongs, and for a unconventional lady, the bohemian world of Covent Garden seems the perfect spot. She has a plan to achieve her goal, but when one of her secret missions goes awry and the King of the Underworld rescues her, danger never looked so enticing. And the future she was certain of now feels utterly confusing.Born and bred on the cutthroat streets of London, Gabriel Beckford has known his share of struggle and loss. He even obtained a few enemies, one of whom is waiting to destroy any lady Gabe falls in love with, so Gabe lives by one simple, necessary rule: never get close. It’s a dictate that’s been easy to abide—until the day Frederica sweeps into his life like a storm. Her passionate nature and impossible impetuousness tempts him beyond reason, and when she declares to make the territory he rules her home, he’ll do everything in his power to stop her and keep her out of his life, head, and heart.But when a threat to Frederica brings Gabe to her side once more, keeping her at a distance becomes impossible. As Gabe’s enemy closes in, Frederica and Gabe must learn how to trust themselves—and each other—and either submit to the love they thought they never wanted or risk losing the very thing that could save them both.
PJ's Thoughts:
Oh, how I loved this book. It's a fast-paced story filled with adventure, danger, sizzling chemistry and one very well-intentioned but hard-headed couple.
I adored Freddy. We've had glimpses of her in earlier books in the series but she really shines in this book. My heart ached for the way she's always felt an outsider both within her own family and society. But I cheered her on as she refused to let the fact that she grew up privileged in Mayfair prevent her from embarking upon secret missions to help women escape from danger in less desirable sections of London. And I understood her desire to forge her own path apart from society once both of her sisters were married. I loved her boldness, her internal strength, her refusal to be put aside, even if it's done with the intention of keeping her safe. She's the perfect woman to go through life beside Gabe...if he can get out of his way long enough to realize it.
And then there's Gabe. It was so much fun watching him struggle - and fail - to keep his distance from Freddy. He may be King of London's Underworld but he's also a man of honor, a natural protector of those within his care, and a man shaped by heart-wrenching events of his past. It shows in his relationship with his sister, in his friendship with Freddy's brother-in-law, in how he deals with men who abuse women, and how he wages a battle with himself over falling in love. Because he knows what an old friend turned enemy will do if there's even a hint that another woman has captured Gabe's heart.
I didn't stay up until the wee hours reading this book but that's only because I started it early in the day. Once I started reading, however, I was totally hooked. There was no way these characters were going to let me put their book down until I was certain of their safe and happy ending. I ditched every single thing on my to-do list and devoured their story in one delicious gulp. It's my favorite book in the series and Gabe and Freddy have become one of my all-time favorite Julie Johnstone couples. I'll be revisiting this one again.
Though this is the fourth book of a series, it can absolutely be enjoyed as a standalone.
~~~~~~~
Have you read any of Julie Johnstone's books?
Do you enjoy historical romance that takes characters out of London's ballrooms and into the more dangerous areas of the city?
One randomly chosen person who posts a comment before 11:00 PM, May 11 will receive an e-book copy of Lady Frederica and the Scot Who Would Not.
*Must be 18
Posted by pjpuppymom at 4:00 AM