Review - - Not You Again

Not You Again
by Terri Osburn
The NOT Series - Book 1
Publisher: Macie Rae Publishing
Release Date: May 24, 2021
Reviewed by PJ 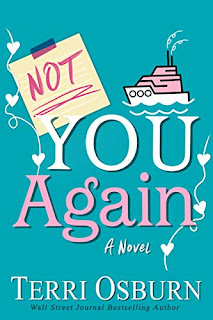 Four blind dates in five days. I can’t believe I agreed to this.Actually, I can. That’s what I do. I agree to things I don’t want to do to make other people happy. In this case, my four best friends. They’re worried about me and if going on a few dates will make them happy, then I’ll do it. How bad could they be?I probably shouldn’t have asked that.I’m starting to seriously wonder if my friends know me at all. Each pick is worse than the last, and none of them compare to my former fiancé. But then I guess maybe that’s the point. Someone new to help me forget the old.To help me move on.Except I don’t need a man to prove that I’ve moved on. Why can’t my friends understand that? And why does the same beautiful stranger keep saving me from these awful encounters? The universe seems to be throwing him into my path, and the more time I spend with him the more I wish that he was one of the dates.There’s one more date left and I can’t help but wonder if he’ll pop up again. How many chance encounters can two people have? Pittsburgh is a big city so the chances are slim.But what if…?
PJ's Thoughts:
Terri Osburn is an auto-buy author for me. I enjoy her humor, snappy dialogue, and heart-tugging romance which are all on display in Not You Again. The first half of the book is brimming with that humor as Becca, an overworked event planner who clearly has no interest in dating, finally caves to her friends' well-meaning nudges and agrees to go on four blind dates, each engineered by one of her girlfriends. The first three are hilariously cringeworthy - obviously any second dates are out of the question - but each one has something in common: a handsome stranger who always seems to be in the right place at the right time to assist Becca in her escapes from the doomed dates. She's intrigued, quite possibly interested, but something holds her back. Eventually, we discover what that something is and it's at that point that the book takes a deep emotional dive.
I wasn't expecting the turn in the tenor of this story but, upon reflection, it's exactly what was needed and Osburn handled the tragic situation that necessitated that turn with sensitivity and care. As events from her past were revealed, including her reasons for not wanting to date, Becca's character became more textured, more relatable, and more emotionally layered. It was clear that there were emotions she needed to confront, process, and accept before she would be able to put the past behind her and move forward, before she could even consider the possibility of once again opening her heart to love. Again, the author used care in giving her characters the time and space necessary for the needed growth and healing to occur. By the time Becca reached the end of her journey, I was fully confident in her readiness to take that next step forward into a relationship and tickled pink with the man taking that step with her.
Not You Again is hard for me to categorize. It's a sweet blend of romance, romantic comedy, and women's fiction with a satisfying HEA. It had me laughing out loud in parts, sobbing through multiple tissues in others, and sighing happily at the end. It's a story that touched me deeply. I've read everything Osburn has published and, for me, this ranks as one of her best.
Not You Again launches a new series that has me eager for more trips to Pittsburgh (so vividly described, especially the neighborhoods, that the city is almost a character in itself) with stories starring Becca's friends and, hopefully, future peeks into Becca's new relationship as well. I've already marked my book calendar for Not Playing Fair, Megan's story, due to be released August 30, 2021.
Posted by pjpuppymom at 8:00 AM