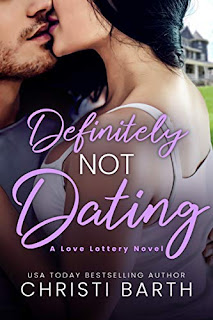 It's a chance to start over for both of them...Everleigh Girard always dates the wrong men at the worst times. The last debacle cost her a job and an apartment. But thanks to a crazy lottery win, she and her friends have a fresh start restoring a historic inn. Determined to make it a success, Everleigh swears off the dangers of dating entirely. Except…the town’s police chief is distractingly hot. So how much trouble could friends with benefits really cause?Police chief Matt Halliday always puts protecting his town first. He’s blindsided when his house mysteriously burns down, and grateful his friends rent him a room at their inn while they finish renovations. It’s a great deal. Mostly. It’s hard to resist the very beautiful Everleigh. Love is permanently off the table for him—but lust is definitely on.After their first red-hot kiss, keeping it casual is impossible. Can Everleigh teach Matt to trust again—especially when he’s keeping a secret that may put him and his new friends at risk?
PJ's Thoughts:
I am having so much fun reading this new series from Christi Barth. I love these four long-time friends who have bonded together to form a family of the heart, uprooted their lives, and moved to Maryland to restore the dilapidated inn they unexpectedly won in a Christmas Eve lottery. With an enormous amount of work ahead of them, and a limited amount of time, they make a pact to not date until the inn is open and making money. We saw how well that worked (not) in book one, The Accidental Fiancé and it's not looking too promising for Ever and Matt in this one either. Which, of course, makes this romance fan giddy with delight.
Barth has assembled such an intriguing cast of characters for this series. I really enjoy the dynamic not only among the four friends but also with members of the community as business ties and friendships form and begin to deepen. There are some great secondary characters in the series and I'm appreciating the fact that Barth continues to develop them from book to book. The fact that Matt is keeping secrets from two of those characters - friends (and inn owners) Teague and Alex - and the fact that those secrets are tied to the woman they view as a little sister adds another layer of complexity to his story. And the scene where they confront him? Perfection!
Ever and Matt have a wonderful chemistry that sparks whenever they're in the same vicinity and they're finding it increasingly difficult to ignore it, especially after his house burns and he moves into the not-quite-ready-to-open inn. But they also both have emotional baggage that has them convincing themselves that they're not really "dating" (they so are).
They both have great character arcs that exhibit a significant amount of growth on each of their parts. Ever, especially, has deep-seated self-worth issues that are the result of years of emotional abuse from her parents. My heart ached for her but also I cheered for the progress she makes. She comes so far from the beginning of book one and the pace Barth sets for her is just right. I loved Matt's support of her. Of course, he also has some lessons to learn and they aren't exactly easy. In the end, though, he comes through with flying colors and proves to me - and Ever - that he's worthy of her love. ::SIGH::
There's also a suspense thread that runs through this book that helps to develop Matt's character and adds a touch of mystery to the romance. I enjoyed the added depth it brought to the story and the fact that it kept me guessing as to the who, how, and why.
The third book in the series, Wrong for Him (9/27/21), features a best friend's little sister trope, one of my favorites. I can't wait to discover what Barth has planned for Amelia Kirkland and former Special Forces soldier (and her brother's best friend), Teague Sullivan.
Posted by pjpuppymom at 12:30 AM