Review & Giveaway - - Not the Kind of Earl You Marry

Not the Kind of Earl You Marry
by Kate Pembrooke
The Unconventional Ladies of Mayfair - Book 1
Publisher: Forever
Release Date: July 27, 2021
Reviewed by PJ 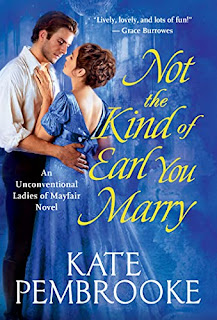 The one woman in London who doesn’t want to marry him is now his fiancée.William Atherton, Earl of Norwood, is as shocked as the rest of London to discover his betrothal via an announcement in the morning paper. Furious at what appears to be a shrewd marriage trap, William tracks down his alleged fiancée before her plans can affect his campaign for a coveted political post. But then William realizes an engagement, however fake, may benefit them both . . .Miss Charlotte Hurst may be a wallflower, but she’s no shrinking violet. She would never attempt such an underhanded scheme, especially not with a man as haughty or sought-after as Norwood. Yet his suggestion to play along with the betrothal has its merits . . . and the longer they pretend, the more undeniably real their feelings become. But when the true culprit behind their engagement is revealed, can their newfound happiness survive the scandal?
PJ's Thoughts:
A fresh new voice on the historical romance scene, Kate Pembrooke brings readers a debut novel filled with witty banter, fun chemistry, a bit of a mystery, and one of my favorite tropes. I love a fake engagement story and this one - with an intriguing twist - pulled me in from page one, promising a fun ride that kept me smiling and happily flipping pages.
Charlotte and William are both good people; interesting, likable characters who are well formed and easy to root for. I appreciated William's willingness to quickly apologize and take responsibility for misguided actions. I enjoyed the delicious friction that developed between him and Charlotte as their fake relationship progressed and, eventually, feelings came into play. And I loved how the author used well-placed splashes of humor to unveil more of William's and Charlotte's personalities, especially in the notes they exchanged and their interactions with William's aunt (she's a hoot).
I liked that William's feelings began to deepen first while Charlotte remained determined that their "relationship" would be temporary. I  found Charlotte's evolution to be very realistic, appreciating that Pembrooke kept her on a gradual growth path, dealing with conflicting emotions along the way. It made her eventual decisions that much more realistic. I also enjoyed the female friendships she found with William's sisters, Serena (our next heroine), and the ladies of the Wednesday Afternoon Social Club. I want to be a member!
Not the Kind of Earl You Marry is a sparkling debut by Kate Pembrooke and a promising start to this new historical romance author's career. I recommend adding it to your summer reading list. I'm already looking forward to book two, Say You'll Be My Lady, scheduled to be released in February 2022.
~~~~~~~~~~~
I love both writing and receiving handwritten letters but it seems to be a dying art. Do you still write letters?
What's your favorite romance trope?
What books are on your reading schedule this week?
One randomly chosen person who posts a comment before 11:00 PM, July 28 will receive a print copy of Not the Kind of Earl You Marry.
*U.S. only
*Must be 18
*Void where prohibited
Posted by pjpuppymom at 6:00 AM