Review - - Circling Back to You

Circling Back to You
by Julie Tieu
Publisher: Avon
Release Date: July 12, 2022
Reviewed by Hellie 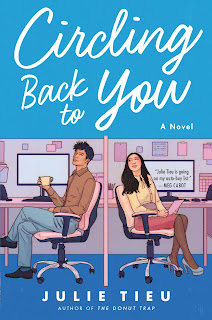 Cadence Lim has transformed from behind-the-scenes number cruncher to an integral part of the sales team at Prism Realty. But despite moving up the corporate ladder, her complicated relationship with her estranged elderly father weighs heavily and she can’t seem to shake the desire for a new beginning.

At least Cadence can always lean on her favorite co-worker and co-conspirator, Matt Escanilla. A top broker with an unsuccessful love life, the forever single Matt is constantly being nagged by his loving Filipino family to settle down.

Their relationship takes a turn when a business trip lands them both in their hometown and Matt enlists Cadence as a pretend girlfriend for a family gathering. The new after-hours setting forces the two friends to see each other in a new light, and their previously buried feelings rise quickly to the surface. When competing promotions threaten to separate Cadence and Matt, these office besties must work together to round up their ambitions and families to pursue their overdue romance.

This is the Netflix series I want to watch this summer, y’all. This rom-com fits my definition of rom-com with witty banter, family hijinks, and the occasional slapstick humor, usually involving bad dancing or clothing choices. I would be happily reading–and then burst out laughing at some scene–and my hubby would be like, “What, what? Are you okay?” I did this multiple times; he never learned, though he did say, “This must be a good review book.” And I’d say, “YES, this is definitely a good review book.”

What I enjoyed most is that both the hero and heroine are insanely nice people. At no point does either of them do underhanded or back-stabby things that can occasionally happen in other romances where it’s some dirty deal that benefits one of them. Matt and Cadence work in a cut-throat sort of company, but these two always have each other’s backs. Now, do they have secrets? Yes, they both are secretive, though Cadence is definitely the more secretive. There is still plenty to work with on the Conflict Front, giving them a chance to grow and change as a thoughtful couple. But these two–so cute–are definitely each other’s “hype-man” when it comes to work. We should all be so lucky in work colleagues.

The secondary characters are diverse and fun, but also very likable. I think the complicated relationship I latched onto most was the one between Cadence and her father. She does not want to return to LA where her family lives and have to live with her father, which would be expected of a single daughter of a Chinese family. Or so she thinks. After all, her father is very traditional and can’t let go of anything…right? Not exactly. Watching that relationship grow and change was bittersweet and heartwarming. However, if you want the laughs, the scenes with Matt’s cousins and big extended Filipino family are hysterical and do not let up. If you were an only child…or basically almost an only child, you will appreciate, I think, continuing to be an only child. Sorry, that sounds very hermit-like of me…they were lovely people, er, characters.

This story felt like a REAL story with REAL people–and I think when an author can do that and does it as well as Julie Tieu did–you just can’t imagine these people not existing. And I think that’s the best compliment you can ever pay an author. This was a delightful read and one I’d recommend for anyone’s TBR pile this summer. Enjoy!