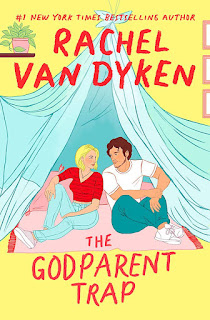 Colby's living her best life: as a popular food blogger, she gets to fulfill her dreams of exploring the globe. But her world comes crashing down when a tragic accident leaves her co-guardian of her best friend's two adorable children. Not only does she need to put down roots—fast—but she'll be sharing custody with the one man she can't stand sharing a continent with, let alone a house.   Accountant-extraordinaire Rip values rules and plans. But when he loses his sister and his best friend and becomes an insta-guardian all in one night, Rip sees his organized life imploding. What he really doesn't need is his sister's irresponsible, flighty—albeit kind and gorgeous—best friend making it worse. Rip doesn't trust Colby to take their new responsibilities seriously, while Colby can't believe Rip thinks children will thrive under his rigid control. Yet soon Rip and Colby discover they need each other more than they hate each other. Could it be possible that following their hearts is just what their new little family needs?

I've not read this author before and didn't really know what to expect when I began The Godparent Trap. The subject matter had the potential to be fraught with emotion but looking at the cover of the novel, one could reasonably expect the story to be a lighthearted romcom. It was both...and so much more than I expected.

The launching point for this story is the sudden, tragic death of a young husband and wife, leaving behind two young children, along with a brother and best friend designated to care for them. A brother and best friend who are polar opposites, had one disastrous date years ago, and have been adversaries ever since. They don't like each other, don't understand each other, and can't deny the simmering attraction that simmers below the surface in spite of that. Throw them into an emotionally volatile situation where they have to live and work together to care for two kids and, oh yeah, it's going to be messy.

One of the things I most appreciated about this book was that Van Dyken didn't shy away from those messy emotions that are part and parcel of navigating grief. Some of the scenes were heartbreaking and took me straight back to my own grief after losing loved ones but others had me laughing out loud and elicited memories of doing the same in similar situations. The evolving relationship between Colby and Rip - and the children - was raw, real, hilarious in many parts, and poignant in others. Rip and Colby really were enemies in the beginning with the author using biting humor and disdain (especially on Rip's part) to bring that point home. Kudos to her for giving them no easy fixes, which would have been easy to do. Instead, she took them on a winding journey filled with real-life challenges, attitude adjustments, eye-opening experiences (having full responsibility for two young children will do that), heart-tugging romance, and a slow awakening of possibilities.

Both humor and emotional depth are strong in this story, one equally balanced by the other. The characters are well developed, relatable, and felt very authentic. I was fully invested in Colby, Rip (once he got rid of that stick up his...and we began to see his heart), the kids, and let's not forget Rip's self-appointed, chatty best friend, Banks, the architect of more than a few of the humorous scenes in this story. Everyone should have a best friend that invested in your happiness. I adored him.

I recommend adding The Godparent Trap to your summer reading list. Keep the tissues handy but be prepared for plenty of laughter too, along with a satisfying HEA and some surprises along the way.

Tell me about a book that had you laughing and crying in equal measure.

One randomly chosen person who posts a comment before 11:00 PM, July 29 will receive a print copy of The Godparent Trap.