Review - - Every Rogue Has His Charm 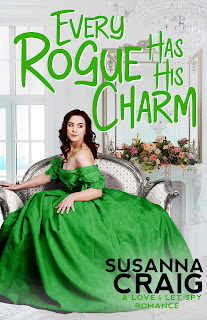 Caroline, Marchioness of Chesleigh, has been married for six years—at least in name. In fact, Caro has hardly seen her husband since the early days of their union. Scarred and reclusive, Maxim wasn’t ready to trust his wife with his secrets—or his heart. Instead, he quickly resumed his life of espionage in France, believing Caro was better off alone.   When the spy who left her returns upon inheriting the Dukedom, he finds his wife is not the girl she once was. Her heart is a little harder. She’s learned to stand on her own. Yet the desire that once ignited between them burns as hotly as ever . . .   Now, the more Caro learns about the past Maxim tried to hide from her, the deeper their bond grows. But danger haunts her husband’s every move, jeopardizing their passionate reunion . . .

PJ's Thoughts:
One of the things that first drew me into Susanna Craig's books was her complex, richly-detailed characters. They hold my interest, engage my emotions, and push her stories forward in realistic, relatable ways. That continues to hold true with the newest installment in her Love and Let Spy series, Every Rogue Has His Charm. Craig's unlikely matchmaker, a spymaster general no less, has his work cut out for him this time!
Caro and Maxim both had so many layers. I enjoyed watching them slowly peeled away to reveal their hearts, fears, vulnerabilities, and love. I'm not typically a fan of reunion romances where one partner abandons the other for long periods of time but Craig made it work, sending Maxim fleeing from unexpected feelings and giving Caro the necessary time - and circumstances - to grow stronger and more confident in herself. When they reunited it was on a level playing field, with Caro not hesitating to go head to head with her long-absent husband, giving me a romantic journey of passion, forgiveness, acceptance, and love that kept me eagerly flipping pages.
Another thing I enjoy about Craig's books is her propensity for moving her stories out of London and into interesting places brought to life through her detailed descriptions and impeccable research. It makes her stories feel fresh and new and, in this book, added to the mystery of who is behind the accidents that keep putting Maxim and Caro at risk.
The secondary cast surrounding Caro and Maxim play significant roles in this journey with another potential couple taking their own romantic journey as they also helped move the story forward. As a fan of the series, this secondary romance - as well as the career opportunities - for one particular character filled me with delight.
Every Rogue Has His Charm is the fourth book in this series but as with the others, it stands well on its own. Readers new to the series can absolutely jump in with this one and not miss a beat. A small warning though: the epilogue is a retirement party for our erstwhile matchmaker that brings all four couples together. You might want to hold off on reading the epilogue until later if you plan to read the first three books (and you should; they're all terrific). The series books, in order, are:
Who's That Earl
One Thing Leads to a Lover
Better Off Wed
Every Rogue Has His Charm
The first three books are each on sale today in e-book format for only $0.99.
Have you read Susanna Craig yet?
Do you enjoy a thread of mystery in historical romance?
Posted by pjpuppymom at 5:00 AM