Review & Giveaway - - Up All Night with a Good Duke 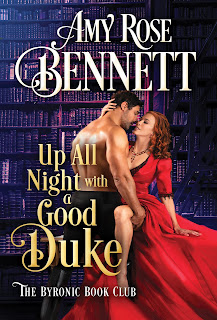 Artemis Jones—"respectable" finishing-school teacher by day and Gothic romance writer by night—has never lost sight of her real dream: to open her own academic ladies' college. When Artemis is unexpectedly called upon by a dear friend, a fellow Byronic Book Club member, to navigate her first London Season, she comes at once. Who knows, perhaps she can court the interest of a wealthy patron for her school. As long as she can avoid her high-handed aunt's schemes to marry her off.

Dominic Winters, the widowed Duke of Dartmoor, needs a wife—someone who will provide him with an heir and help him to manage his spitfire adolescent daughter. The problem is, Society has dubbed him "The Dastardly Duke." Rumors are rife that he murdered his mad wife so his choices for a suitable bride are limited. But then he meets the ravishing and passionate Artemis Jones who might just be everything he needs.

I discovered Amy Rose Bennett through her Disreputable Debutantes series - which I thoroughly enjoyed - and was excited to dive into a new series by her. I'm delighted to share that I found this first book in Bennett's The Byronic Book Club series to be charming, humorous, emotional, and deliciously satisfying.

I'm always up for a misunderstood hero with a mysterious - is he the good guy or the bad guy - event in his past. Bonus points if he's a loving single father who has no idea how to deal with his moody, growing-up-way-too-fast, teenage daughter. Pair him with an intelligent, accomplished, slightly scandalous (she has a secret!) spinster and I'm beside myself with glee.

I loved the chemistry between Artemis and Dominic. I loved their open and (mostly) honest conversations (she does have a good reason for keeping her books a secret). These are mature characters and behave accordingly. I could feel their emotions, the respect between them, and the solidity of the partnership they formed but also the sweetness, the humor, and the passion. These were characters I genuinely liked and cheered on, both individually and as a couple. Of course, there are potholes on the road to their sigh-worthy declaration of love - there always are - but I was happy with the way in which they were handled.

The secondary cast of characters were richly depicted and contributed significantly to the story. I love strong female friendships and am already looking forward to the next two books featuring the other members of the Byronic Book Club. I especially enjoyed the evolution of Dominic's daughter, Celeste and her relationship with Artemis. It felt very authentic. The villains (with different agendas and not working together) were both despicable but dispatched in a very satisfying manner. I love when the bad guys get what's coming to them.

If you haven't discovered Amy Rose Bennett yet, Up All Night with a Good Duke is a great place to begin. It has my enthusiastic recommendation. The second book in the series, Curled Up with an Earl, is scheduled to be released February 7, 2023. I already have it on pre-order and am eager to discover what Ms. Bennett has in store for scientific Lucy and covert government agent/Earl of Kyle, Will.

I received a print copy of this book from the publisher in today's mail so I've added a giveaway to the post.

Have you read Amy Rose Bennett yet?

Artemis is a teacher by day but a secret author of Gothic romances by night. If you could choose, what would your secret occupation be?

One person who posts a comment before 11:00 PM, July 7 will receive a print copy of Up All Night with a Good Duke.

Posted by pjpuppymom at 5:30 AM