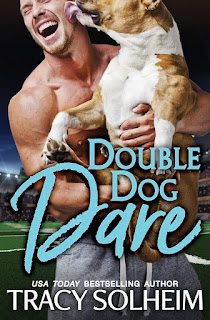 They say he who dares wins…

Luke Kessler is known for his daring play on the field and his carefully scripted life off it. The Growlers’ wide receiver has a strict rule of dating one carefully chosen woman per season, then letting her down gently. After all, his game is football, not love. That is until his dopey mutt falls for a French bulldog owned by a hot mess of a woman whose sassy mouth and mind-blowing curves have him fumbling his best laid plans.

After a humiliating concert performance played out in front of the world on social media, cellist Summer Pearson has sworn off a career in music. Forever. She’s hiding out with her grandparents in Milwaukee, licking her wounds and preparing for a predictable, if not boring, law career. The last person she needs challenging her life choices is a sexy, dog-rescuing jock who loves his grandma as much as he loves a good dare.

Especially when that same guy is dating her perfect cousin.

I've already read this book twice. I have no doubt I'll probably read it again. As much as I enjoyed the first book of Solheim's Milwaukee Growlers Football series, I loved this one even more. Such a funny, swoony, heart-tugging, sassy, feel-good story!
There are so many facets to this story it's impossible to claim only one as my favorite. The team dynamics are spot on with the scenes featuring the Growlers players among some of my favorites in the book. I can't be the only one eager for the QB's story. And then there's the rookie receiver. What an endearing character; I just wanted to hug him. The seniors are by turns hilarious and poignant, bringing me to laughter and tears more than once. And don't get me started on the dogs. Scene stealers, the both of them!
But it's Luke and Summer who captured my heart. I laughed with them, cried with them, ached with them. I loved these two so much! Solheim did an outstanding job of creating two multi-layered characters with emotional baggage and complex family dynamics who I couldn't help but root for. Their journey was filled with laughter, sexy shenanigans, achingly poignant sweetness, surprising revelations, and, of course, a happily ever after, in more ways than one.
Whether you love football, dogs, music, or just a fast-paced, fun, contemporary romance that will tickle your funny bone, touch your heart, and keep you eagerly flipping pages from beginning to end, I recommend adding Double Dog Dare to your reading list.
~~~~~~~~~

Tracy Solheim joins us today to share a bit about her writing process and her Milwaukee Growlers. Welcome, Tracy!

Thanks for inviting me to the dish today, PJ! I’m excited to tell readers about my new book featuring hunky football players, adorable dogs, zany senior citizens, and a happy ever after for two people who don’t think they deserve one. But first, I thought I’d pull back the curtain and give readers a peek inside an author’s process.

Writing a novel is a solitary endeavor for most authors. We spend hours each day wrestling with our keyboards to make the words in our head sound just as exciting on the computer screen. But for each of us, our process is very different.

I know a lot of authors who can’t write unless they are streaming a television show in the background. I’m always stunned by this because if it’s a good show, I’m usually sucked into watching in the first few minutes, and there’s no way any words will flow for me until the show is over. Except then, I’ll have to binge the entire series.

Other writers like to park themselves in a coffee shop or library to get their words down. I’m too easily distracted by the conversations—both verbal and non-verbal—going on around me to get any writing accomplished outside of my writing cave. And if you don’t think we authors use the little tidbits we hear around us, think again! So if you’re going to argue with someone on your cellphone, put it on speaker so we can listen to both sides. 😊

Still, other authors use music as background noise while they write. I used to be able to do that when I was working in non-fiction, but not so much anymore. I’ve tried streaming one of those “brain music” apps to get the words flowing, but all that did was remind of the dentist’s office, and then I was too stressed to write.

That’s not to say that music doesn’t play a big role in my books. I often associate certain bands or genres of music with my characters and scenes. Never more so than in my upcoming book, Double Dog Dare. Summer Pearson, the book’s heroine, is a YouTube famous cellist who has lost her edge after a humiliating performance streamed all over social media. Originally, I planned to make Summer a classically trained musician, but that seemed too serious for her. Instead, I wrote her as a musically gifted woman who possesses relative pitch and can play any tune by ear. In the book, she performs music from every genre, including a lot of recent pop hits. I enjoyed coming up with a playlist for her various performances. If you’re interested, I have a link to the playlist for you here.

Do you like to listen to music while you work? I’ve got a signed print copy of Double Dog Dare for one of you (international winner will receive a digital copy) along with some fun swag. Just tell me in the comments your favorite genre of music. My playlists are pretty eclectic, everything but heavy metal and hard rap.