Review & Giveaway - - Always Be My Duchess

Always Be My Duchess
by Amalie Howard
Taming of the Dukes - Book 1
Publisher: Forever
Release Date: July 12, 2022
Reviewed by PJ 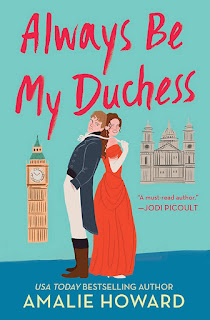 Lord Lysander Blackstone, the stern Duke of Montcroix, has only one interest: increasing his considerable fortune. After a series of betrayals, he keeps his emotions buried deep. Money, after all, can't break a man's heart—or make promises it can’t keep. But when his reputation for being heartless jeopardizes a new business deal, he finds himself seeking a most unusual—and alluring—solution . . . Once an up-and-coming ballerina, Miss Geneviève Valery is now hopelessly out of work. After refusing to become a wealthy patron's mistress, Nève was promptly shown the door to the streets. When she accidentally saves the life of a handsome duke, she doubts the encounter will go any better than her last brush with nobility. But instead of propositioning her, Montcroix makes Nève an offer she would be a fool to refuse: act as his fake fiancée in exchange for fortune enough to start over.Only neither is prepared when very real feelings begin to grow between them. They both stand to win . . . but only if they’re willing to risk their hearts.
PJ's Thoughts:
From beginning to end, I was utterly enchanted by this first book in Amalie Howard's new Taming of the Dukes series. The storyline is fresh and original (with an underlying nod to rom-com favorite, Pretty Woman), and features main characters not often seen in historical romance. Add in sensual love scenes, heart-tugging romance, a fake engagement, plus a gender-flipped rescue and...well...I was pretty much a goner.
Lysander (Stone, to his friends) stole my heart as surely as he captured Nève's. There are so many layers to this neurodivergent character and Howard captured them beautifully. Her depiction of him balanced the genius of his logical mind with his inability to quickly assess the emotional aspects of decisions and situations, creating misunderstandings along his journey while further endearing himself to me, the reader. The authenticity of his character traits created a fully-developed, nuanced individual with a deep capacity for love...with the right person. The right person being an unemployed French ballerina with a head for business, a well of integrity, and a core of steel. I adored her.
Nève is the perfect counterpart to Lysander. I loved her passion, her strength, her kind and genuine heart, but also her refusal to compromise her worth. The chemistry between them sizzled but Howard took her time with them emotionally, moving their relationship forward at just the right pace, allowing a gradual and realistic deepening of feelings, especially on Lysander's part. She also used dance, central to Nève's being, as a vehicle to convey emotion. Her lyrical descriptions showcased her personal knowledge of ballet while also creating scenes that played across my mind like a movie.
The secondary cast of the book were vibrantly depicted, adding humor and a richness to the story as well as fraught conflict (nasty villains but don't worry, justice is served). I especially enjoyed the friendship that developed among the five women (including Nève). Howard used their scenes to not only further develop Nève's character but also allow readers glimpses into each of their characters in advance of what I hope will be more stories. And, their participation in the final, swoon-worthy declaration was an absolute delight. Laughter and (happy) tears.
If you have not yet discovered Amalie Howard's Always Be My Duchess, I enthusiastically recommend adding it to your summer reading list. It's one of my favorite historical romances this year and one that I have no doubt I'll revisit again.
Have you read Amalie Howard yet?
Do you enjoy characters that are outside the historical romance mainstream?
One person who posts a comment before 11:00 PM, July 14 will receive a print copy of Always Be My Duchess.
*U.S. only
*Must be 18
*Void where prohibited
Posted by pjpuppymom at 6:00 AM