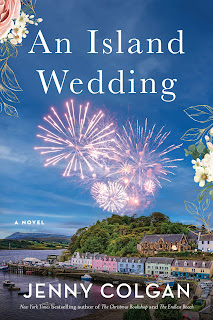 On the tiny island of Mure—halfway between Scotland and Norway—Flora MacKenzie and her fiancé Joel are planning the smallest of “sweetheart weddings,” a high summer celebration surrounded only by those very dearest to them.

In the meantime, beautiful Olivia Mathieson—who left Mure ten years ago for bigger and brighter things—returns with a wedding planner in tow. Her fiancé has oodles of family money, and Olivia is determined to throw the biggest, most extravagant, most Instagrammable wedding possible. And she wants to do it at Flora’s hotel, the same weekend as Flora’s carefully planned micro-wedding.

As the summer solstice approaches, can Flora handle everyone else’s Happy Every Afters—and still get her own?

An Island Wedding is the fifth book in Jenny Colgan's Mure series and takes readers back to this small island for a humorous, heartwarming story that is not without complications, emotional depth, more than a few surprises, and an ending that I really hope will be explored further in a future book.

Colgan brought the island of Mure to life through her vivid descriptions. I could easily picture it in my mind. It would definitely be on my list of places to visit. She then populated the island with intriguing characters, complex relationships, a warm sense of community, and more than one romantic entanglement. I liked that her characters were so fully developed, multi-layered, and realistic. While some of their situations made me laugh, others grappled with real-world issues that made my heart ache. Colgan does an excellent job of balancing humor and light with sacrifice and heartbreak while exploring relationships in their many forms.

I enjoyed the story and by the end I had begun to develop an emotional investment in the characters but was still left feeling a bit like the newcomer who doesn't quite know why everyone is the way they are; what they've been through to reach this point in their lives. We're told some of it but I'm a reader who needs to experience it. If you're the same, I strongly encourage you to begin with book one of the series and read the remaining books in order. After scoping out the earlier series titles, I discovered that many of these characters - and their relationships - have been evolving throughout the series. I need to go back to the beginning and travel that journey with them. I plan to read An Island Wedding again after having read the first four books. I have a feeling that my emotional investment in Mure and her citizens will be much deeper after having done that.

Have you read any Jenny Colgan books?

Are you reading the Mure series?

What fictional (or real) location have you read about in a book that would top your travel wish list?

One randomly chosen person who posts a comment before 11:00 PM, July 9 will receive a print copy of The Cafe by the Sea by Jenny Colgan (book one - Mure series).

One randomly chosen person who posts a comment before 11:00 PM, July 9 will receive a print copy of An Island Wedding.