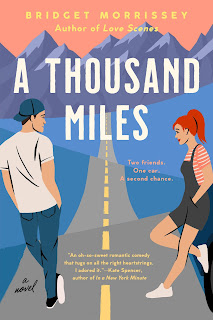 After a decade of silence, Dee and Ben reunite for a road trip they once promised to take. It’s going to be a bumpy ride.Dee Matthews is the cohost of the smash-hit podcast Did I Forget To Tell You?, where she interviews family, friends, and past lovers. Nothing is off limits, except for one man (known on the show only as Name Redacted) who happens to be her high school best friend Ben. During their senior year spring break, Dee and Ben took a road trip to visit Ben’s grandma. They buried a time capsule in her backyard, pledging to return in ten years to open it. Then their friendship fell apart in spectacular fashion. They haven’t spoken to each other since. Ben Porter’s life since that moment has been unexciting but comfortable, until his grandma reveals a family secret that flips his whole world upside down. Her dying wish is for him to stop doing what is safest and go after what he really wants. He starts by showing up on Dee’s doorstep with every intention of fulfilling their long-ago promise. Despite her reservations, Dee can’t say no. This trip could be her chance to give her listeners the Name Redacted interview they’ve been begging for—and finally put her unresolved feelings for Ben to rest. As the miles fly by, Dee and Ben's friendship reignites. But the closer they get to reaching their destination, the more apparent it becomes that their attraction to each other cannot be ignored. Their last adventure ended in disaster, and they’re about to find out if any hope of a future together is in the rear view mirror.
Santa Says:

A Thousand Miles by Bridget Morrissey is a four star read. It is at once both a simple and complicated story about a lost friendship that was never really let go. Dee and Ben were best friends in high school. In their senior year, they drove from Illinois to Colorado to visit Ben’s grandmother. Somehow they manage to return with their friendship shattered. Ben walks away without a word and ten years have passed.

They create lives for themselves with Ben becoming a teacher in Indiana and Dee creating a successful podcast around secrets called ‘Did I Forget To Tell You’. Ben shows up after ten years and asks Dee to come with him back to his Gam’s house to pack it up.

What really happens is they unpack all their feelings, angst and love they have been holding onto and hiding from all these years. It is not an easy ride.

Morrissey takes the reader on this journey with Dee and Ben in some of the most beautiful prose I have ever read. I felt all their pain, joy and rediscovery of each other and themselves in every line. She interjects pieces of Dee’s podcast. Her co-host grew up with them and witnessed it all. Family secrets are exposed and their dynamic will be changed forever.

A Thousand Miles is brilliantly written. This is Bridget Morrissey’s second book. I will be reading her first book, Love Scenes, and look forward to many more books by her.