Review - - You Were Made to be Mine

You Were Made to Be Mine
by Julie Anne Long
The Palace of Rogues -  Book 5
Publisher: Avon
Release Date: June 28, 2022
Reviewed by Santa 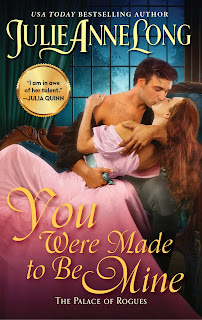 The mission: Find the Earl of Brundage’s runaway fiancée in exchange for a fortune. Child’s play for legendary British former spymaster, Christian Hawkes. The catch? Hawkes knows in his bones that Brundage is the traitor to England who landed him in a brutal French prison. Hawkes is destitute, the earl is desperate, and a bargain is struck.

Fleeing a savagely shattered dream, the sheltered Lady Aurelie Capet finds refuge in an alias and the warmth and kindness of the Grand Palace on the Thames—until a gorgeous, mysterious disturbance to her peace literally topples through the door.

An unexpected, fierce desire that feels destined, dangerous—and devastatingly sweet—ignites between the sheltered beauty and the jaded spy, and as they slowly unravel each other's shocking secrets Hawkes closes in on the truth about the earl. Soon it’s clear they can have no future without vanquishing the past: Hawkes knows that loving her means avenging her. Aurelie knows that loving Hawkes means freeing him to do that, no matter the cost.

You Were Made to Be Mine by Julie Anne Long is another triumph in her Palace of Rogues series. This was a five star review for me. You know from the first page Hawkes and Aurelie were meant to be. And what better place to find one’s forever love than the Palace. But their journey doesn’t start in England but in post-war Paris. Lady Aurelie Capet is engaged to the Earl of Brundage but has mysteriously disappeared. Brundage engages Christian Hawkes who was released from a French prison for espionage. Someone betrayed Hawkes just as he was about to reveal the identity of an English traitor who cost hundreds of British lives in a battle led by General Blackmore, now the Duke of Valkirk. YES, that Duke from Julie Anne Long’s equally wonderful After Dark with the Duke.

Hawkes agrees after looking at a miniature of Aurelie. He tracks her to England and, serendipitously, to the Palace. He literally falls at her feet, as does the rest of the house when Dot opens the door. He had just been stabbed. Dot’s screams bring the maids, who also scream and faint, and everyone to the foyer as the half dressed captain and viscount fly over balusters to see what the screaming is all about. All the while Aurelie moves forward, kneels and tends to Hawkes' wounds. It is at once the funniest and most poignant scene in the book.

I love Julie Anne Long’s writing style and how she uses wit and physical humor to tell her stories. Her love scenes are sublime. Not only do these two fall in love with each other they fall in love with the family they find at the Grand Palace on the Thames. This found family, with Dot and Mr. Delacourte and all the others adds such warmth and dimension to Aurelie's and Hawke’s story.

I look forward to the next installation of this series. Can’t wait!

Email ThisBlogThis!Share to TwitterShare to FacebookShare to Pinterest
Labels: 5 Star Review, 5 stars 2022, Avon Books, Historical Romance, Julie Anne Long, Santa, Santa 2022, The Palace of Rogues, You Were Made to Be Mine