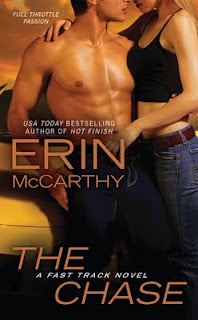 Years ago, after confessing her dreams of becoming a NASCAR driver to her boyfriend, Kendall Holbrook and Evan Monroe abruptly broke up. Now ten years later, Kendall has finally made it after working her butt off. And of course, a woman driver in the all male cup series is BIG news. If she wants to stay there, she needs to continue to work hard, which means avoiding Evan Monroe at all costs. But when they’re forced to work together, Kendall has a hard time keeping Evan from getting under her skin.

Evan Monroe never had to prove himself in order to be a driver as his entire family is in the business. But lately his racing season has been downright dismal. To top it all off, his huge sponsor drops him like a hot brick. The only one that gives him an offer is Untamed Deodorant for women and men . . . and he has to share the sponsorship with Kendall. Since he never got over her, Evan is perfectly fine with the scenario as it will allow him to pursue Kendall in earnest and hopefully win back her heart. But can they be together and still compete in the chase?

I am a big fan of this series, despite the fact that I don’t follow NASCAR. I enjoyed this story a bit better than the last book, though the second, Hard and Fast, is still my favorite. I was rooting for Kendall both on and off the track. Her family has never really accepted her desire to race since they consider it a man’s sport, and despite the fact that she wanted it, she sometimes finds it hard to fit in.

Kendall was used to straddling two worlds, being forced to decide at parties if she should align herself with the women, who were wives and mothers, or with the men, who were her co-workers. But she was tired of it. She wanted to belong somewhere, and her gut, her heart, kept telling her that place was with Evan.

When it comes to Evan, racing is in his family’s blood. His father is a former driver, his brother Elec races and his sister Eve (who I desperately hope Ms. McCarthy will write a story for!) is the PR rep for the brothers. It was always expected that Evan would race and he always has, so it was enjoyable watching him break from tradition to make difficult decisions and go after what he wanted. I really appreciate that Ms. McCarthy didn’t allow Kendall and Evan to dwell on the big misunderstanding from their past. They got over it quickly, which showed them to be both forgiving and intelligent characters. And their chemistry? Scorching! I almost broke a sweat reading the love scenes. You don’t need to be a fan of NASCAR to enjoy The Chase . . . just a fan of fun, sexy contemporaries!


You can order your copy of The Chase here: