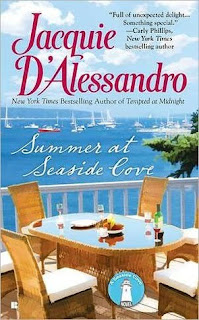 “Nick dashed into the waves, jumping over several before making a shallow dive beneath the third. Several seconds later he stood and Jamie nearly swallowed her tongue at the sight of him, rising from the foamy waves like a modern-day Adonis, sun glinting off his glistening skin, his board shorts clinging to him in a way that totally proved the big-feet premise, and totally disproved the whole cold water shrinkage supposition.”


Jamie Newnan has had it! The stress of running the family’s Manhattan restaurant after her father died a few years ago and dealing with a very dependent family would be enough to send any sane woman running for the state line. But when you add the disappointment, hurt and humiliation over the betrayal of her sister with her boyfriend, well heck any warm-blooded woman would want to put a few hundred miles between herself and her problems. And that’s exactly what Jamie Newman did. Deciding to take a couple months off during the summer to rediscover herself and her life dreams, Jamie travels to the small North Carolina coastal town of Seaside Cove. Jamie’s first night in her rented beach bungalow, named Paradise Lost, is a disaster. First, the so-called “cheerful, cozy, inviting” beach bungalow is in a state of dilapidated ruin. Once inside, the image is not any better with sparse furniture and appliances from the 1950s, especially when the stench of dead clams permeates the entire house. After removing the offending clams from the house, a coastal storm arrives and the roof begins to leak. Definitely not a great start to a vacation. Determined to make her stay in Seaside Cove as pleasurable as possible, Jamie arrives at the doorstep of the owner of her little bungalow early the next morning. Luckily the owner, Nick Trent, lives right next door.

Nick Trent has only lived in the small town of Seaside Cove for a few months. The small community has embraced their newest resident as a nice young man with a winning smile who is always ready and willing to help out around the town doing home repairs and handy man jobs. The town folk do wonder why Nick leaves town for days at a time. Rumor has it he goes on alcoholic benders. No one here knows about Nick’s past and he would prefer to keep it that way. After returning from one of his many trips, Nick is awaken at the God-awful hour of 7:25 a.m. to the pounding on his door and the simultaneous ringing of his door bell along with the barking of his sweet-loving chocolate lab, Godiva. With a growl of impatience, Nick quickly opens the door and finds a woman he has never met before.

“It’s about time you answered the door,” she said.

His scowl deepened. He didn’t know who she was or what she was selling, but all that banging and now her attitude had definitely gotten him up on the wrong side of the bed. “I was asleep.”
Her gaze skimmed over him and he could almost hear her cataloging as she went: bad case of bed head, bleary eyes, three-day stubble, no shirt, wrinkled jeans, missing shoes. He did notice that she lingered for several seconds on his unbuttoned Levi’s. When her gaze again met his, pink stained her cheeks. “Wow, you really were on a bender?”

What the hell? “Really? Well, you don’t look so hot, either, whoever you are.” Actually, that wasn’t precisely true. In fact, she looked pretty damn good. Sure her honey-colored hair sported a finger-in-the-light-socket look, and her white tank top and tan pants that hit her midcalf looked as if she’d slept in them — something he could hardly throw stones at – but her eyes were gorgeous. They reminded him of caramel sprinkled with dark chocolate. Probably they’d be even prettier if they weren’t filled with an expression that made it clear she’d like to thump him upside the head."

What a first meeting!!! Unforgettable first meetings seem to blossom into unforgettable relationships and this is definitely the case with Jamie and Nick. After some much needed repairs and improvements are made to Paradise Lost, Jamie and Nick fall into a fun, flirty relationship. They genuinely enjoy each other’s company, whether walking on the beach, playing in the ocean, or eating a fabulous meal cooked by Jamie. Soon, the stress of family and business seem to be lifted from Jamie and she can just breathe again. That is until her mother arrives on the doorstep with news she is pregnant. Before long Jamie’s young niece arrives and then Jamie’s back-stabbing sister appears. Instead of running from her problems it seems as Jamie’s problems have just followed her to North Carolina. Will all this family drama prove to be too much for Nick? Can Nick help Jamie through the drama or will his past add more?

This book is a treasure! It had me at the very first sentence. “The decapitated, plastic flamingo, standing ass-feathers deep in what looked like poison ivy was Jamie Newman’s first clue that doom had followed her from New York.” Something about a decapitated flamingo had me giggling. Maybe because I could hear Jacquie’s voice in my head speaking this sentence as if she is beginning to tell me a story. And what a story it is!

Jamie and Nick is one fabulous couple. Both are ready for a once-in-lifetime relationship and seem to put everything on the line to pursue it. Each of them is a kind, loving individual with a huge heart. The sexual tension between Jamie and Nick is so charged that a single glance between the two can start a 4-alarm fire!! There are not many authors that write sexual tension as well as Jacquie D’Alessandro.

But this book is about more than just the relationship between Jamie and Nick. It is about following one’s desire and passion for life. It is about stepping outside the box and taking chances. It is about loving and forgiving. It is about family and how to love them without letting them rule your life.

The cast of secondary characters from Jamie’s family to the lovable pets to the eccentric residents of Seaside Cove adds so much flavor to this story. Each character is unique and lovable, yet in no way overshadows the focus of the story.

I believe this book is the best book Jacquie D’Alessandro has ever written. The flow of the story is just flawless. Flawless, I tell you. There are no lulls in the story. Not once did my mind wonder from the story. In fact, every word captivates and draws the reader deeper into the story of new found love and the drama of families. Jacquie is known for her sexy, witty romances and this is Jacquie at her absolute best!

I loved this book so much that I am giving away a copy to one random commenter.

Amazon
Barnes and Noble
Book Depository
Books-A-Million
Borders
Posted by Buffie at 12:01 AM