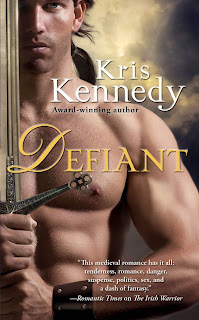 During the tumultuous reign of King John, when civil unrest brewed and loyalties were constantly called into question, a hard, powerful knight and a beautiful young woman stalk the same quarry…for very different reasons.

Jamie Lost, chief lieutenant of King John is sent to capture a priest who has returned to England after fleeing ten years earlier when he witnessed events that, should he talk, could mean the end of King John’s reign. Eva also fled the country ten years ago and has spent that time hiding in France, protecting the young boy she rescued and spirited out of England following the murder of his father by King John. She is after the same priest as well but her purpose is to rescue her dear friend, the man who saved her life all those years ago.

Jamie is a hard man; tested by battle, betrayal and years of living on the streets of London as a child. He has no family, only his friend, Ry who travels with him, and banned love and affection from his heart long ago. Worst of all, to Eva’s mind, he is loyal to King John, a man to be avoided at all costs...but must he be so appealing?

Even a feared, ruthless mercenary, a Brabançon, identified himself with someone. Usually the English king. By the look in this one’s eye, ‘twas a simple enough matter to place him there.

But somehow, she couldn’t believe something so…beautiful could be so awful. And he was beautiful indeed, to a hard line, a masculine magnificence, all long, lean contours of hard heat and piercing eyes. A beast in his prime.

A natural-born caretaker, fighting fiercely to protect the people she loves - Father Peter and 15-year-old Roger, the child she rescued all those years ago – the child that is the missing heir to a powerful English title, information that will put his life at risk should it come to the attention of King John or his chief lieutenant, it’s a given that Eva and Jamie would be natural adversaries. Jamie, of course, is a trained warrior but Eva is a warrior at heart, a fact you would never guess by looking at her and one that causes Jamie no small amount of frustration. Totally unexpected, however, is the instant attraction between the two, not that either has the inclination to act upon it…at first. When the barriers are finally lowered though, and a tentative trust begins to develop, will the man who thinks he has no room for love in his heart and the woman whose fondest dream is a cottage by a river and a family to care for discover a love for the ages? Or, will secrets, betrayals and an unstable king slash their hopes and dreams to shreds?

Kris Kennedy has once again written an unique and emotional love story, filled with passion and adventure and rich in historical detail. She has a way of writing that draws me into the story so that, rather than reading about characters and events, I feel as if I’ve been transported back in time and am experiencing their adventures alongside them, such as in this passage when Eva rides through the English countryside for the first time in ten years.

Eva felt as if she were riding through the middle of one of Father Peter's sketches.  The trees all wore billowing green caps and stood proudly in their dark brown tunics as they marched up and down the hills of England.

Less showy, but more sweet, tiny pricking flowers hurried to the edge of the track.  The hedgerows hosted a profusion of flowering vines and exhuberant birds, flitting their wings and chirping.  Whenever the land opened up, herds of red poppies raced down the hills like ponies, all exhuberance and flicking tails.

Jamie and Eva are complex, multi-layered characters who Kennedy very skillfully reveals to us, one layer at a time, throughout the book. It's the layers, the flaws and conflicts, not only between them but within each of them, that infuses them with the realism that makes them such fascinating characters. There’s an equally interesting secondary cast (primarily Roger, Ry and Angus, the one-eyed Scotsman) whose contributions to the story move the plot along, inject humorous moments and provide insights into the hearts and minds of our hero and heroine. I have hopes that we might see some of them in a future book, perhaps one with young Roger as the hero. I so want to read the rest of his story!

Defiant has joined Ms. Kennedy's other two medieval romances on my keeper shelf where it will no doubt be revisited from time to time.  Writing as good as this never goes out of style.