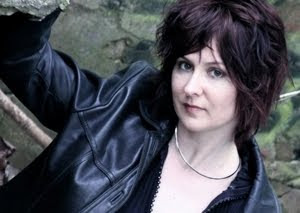 Today one of our favorite authors is hanging at The Romance Dish....Colleen Gleason. Colleen writes some of the hottest vampire romances on the market. Her Gardella Vampire Chronicles have been called "Jane Austen meets Buffy the Vampire Slayer." Trust me when I tell you they're addictive---Andrea will agree. *g*

Colleen, under the pseudonym Joss Ware, also writes the Envy Chronicles, a fascinating post-apocalyptic romance series. She puts the 'b' in busy! Please give a warm welcome to our friend Colleen.

Woohoo!! So happy to be back at the Romance Dish today! Thanks much for having me again.

The last time I was here, I was talking about the latest book in the paranormal post-apocalyptic romance series that I write as Joss Ware…but today, we’re going to zip back in time so I can tell you about my new historical vampire series, The Regency Draculia.

Some people might be familiar with my Gardella Vampire Chronicles, a series about a female vampire hunter who lives during the time of Jane Austen. This new series, while set in a similar time period, is very different.

In this series, the vampires are part of a secret society, a cabal, that belongs to Lucifer. Each member of the Draculia has sold his or her soul to the devil at some point, and now they are living an immortal life with everything they could ever want: pleasure, money, power—and all without the fear of death or other negative consequences.

While the Gardellas were a five-book series about one woman, Victoria Gardella, my new series is definitely vampire romance—heavy on the romance. Each book is about one vampire in particular who falls in love, and, in this context, realizes that his/her soul belongs to Lucifer and is no longer their own—and the story examines how they come to terms (or don’t) with that.

Along with the vampire aspect, readers can expect everything else one loves about Regency-era romances: balls and masquerades, the haute ton, titled bad boys and brooding earls, and witty repartee. (At least, I think it’s witty.)

The first book in the series, The Vampire Voss, which is available now, is about Voss, the Viscount Dewhurst. He’s been a vampire for a hundred and fifty years after agreeing to sell his soul to Lucifer. Now he has everything he’s ever wanted: immortality, scads of money, imperturbable power, and all the women he can handle.

Everything is going along just fine (if not becoming a little routine after more than a century of pure hedonism with no negative consequences) until he meets Angelica Woodmore…who is the first woman he finds himself unable to enthrall and seduce.

The second book, The Vampire Dimitri, will be available next week. And the third, The Vampire Narcise, is coming out at the end of May.

So tell us readers, who's your favorite vampire in a book, movie or TV show?

Colleen is giving away a copy of The Vampire Voss to one lucky commenter (U.S. and Canadian residents only).