Review - - Gone With a Handsomer Man 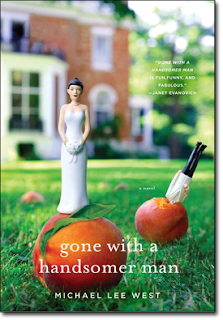 What’s a girl to do when she comes home early to discover her fiancé playing nude badminton with two gorgeous women? Well, in Teeny Templeton’s case, she climbs a tree and starts pelting the offenders with not-quite-ripe peaches which results in her being arrested for assault with deadly fruit (yes, there is definitely some humor in this book), kicked out of the house she and her fiancé shared and slapped with a restraining order. And, when her rich and well-connected fiancé turns up dead a few days later…well, we all know who the number one suspect is. Fortunately, for Teeny, she has a few staunch supporters on her side. There’s Miss Dora, step-mother to the not-so-dearly departed fiancé, who has always liked Teeny better than her step-son and Cooper O’Malley, Teeny’s teenage first love (and heartbreak) who unexpectedly re-enters her life just when she needs a really good attorney…which Coop just happens to be.

Ms. West has written an entertaining novel, rich in Southern sass and charm that is, by turns, suspenseful, poignant and just plain fun, due in large part to the endearing and complex character of Teeny. A small-town Georgia girl from a family of single women, Teeny pretty much exemplifies “what you see is what you get.” Well, except for those little lies she can’t quite seem to keep track of…or the family cookbook that’s filled with poisonous recipes, though the cookbook is strictly therapeutic. Just because she’s a talented baker doesn’t mean she’d actually make any of those designed-to-kill dishes that the women of her family create with particular people in mind. She’s simply carrying on a family tradition. Not that Coop – or the Charleston police – would be likely to understand that if the Templeton Family Recipes were to be found. I love Teeny's flaws, all her little quirks and especially her tendency to bake when the going gets tough – a trait I happen to share.

Teeny doesn’t need to look for trouble. Trouble finds her. The murder scene is staged to make Teeny look guilty. Bing (the dead fiance) leaves his estate to Teeny (more motive for murder in the eyes of the police) but Teeny knew nothing about it, plus she can’t even claim it because she’s the prime murder suspect and she can’t move back into their house because it’s the scene of the crime. She's being stalked by Bing’s crazy sister, who’s furious that Teeny stands to get her inheritance. Not to mention the nude badminton-playing girlfriend/realtor who’s trying to sell the house Teeny’s living in out from under her or Red Butler (gotta love that name), Coop’s investigator, who she can’t seem to win over no matter how hard she tries.

At least Coop believes in her and it isn’t long before old feelings come rushing back for both of them.  But, just as love begins to bloom, a major wrench is thrown into the works that could bring their relationship to a screeching halt. Then there’s the fact that whoever is trying to frame Teeny (and there are several suspects) ups the ante. Putting Teeny in jail isn’t good enough anymore. Now they want her dead, but help arrives from an unexpected quarter and gives Coop and Teeny a shot at their happy ending.

Based on the final sentence of this book (a shocker for sure!), I’m guessing (hoping) Gone with a Handsomer Man is the first book in a series with the continuing characters of Coop and Teeny. I’d like to see Ms. West delve more deeply into the character of Coop in the next book. While I liked him (how can I not like a man who declares his love with Red Velvet cakes?) I want to know more about what makes him tick. I’m also hoping to see more of Red Butler, I can’t wait to see what trouble Teeny attracts next time around and I'm definitely looking forward to more recipes - a delicious benefit of having a heroine who's a baker.  I haven't made any of the recipes in Gone with a Handsomer Man yet but Teeny's Vanilla Peach Coffee Cake is high on my list!

This book was my introduction to the writing of Michael Lee West.  Her writing style reminds me of one of my favorite Southern writers, Mary Kay Andrews.  If you're a fan of Andrews, or just in the mood for a smart, sassy, fast-paced story with likeable characters and plenty of laugh-out-loud moments, I highly recommend Gone with a Handsomer Man.