Review - - Too Sinful to Deny

“Dear Mother,” she scratched across the top of a yellow sheet of parchment.
I was wrong. I do hate you more than you hate me.
“Moonseed Manor has proven to be an unacceptable choice for accommodation.”
Not that I expect you care.
“While I have not spoken with Father’s cousin-“
- because she’s most likely DEAD-“
“-I did meet the master of the house-“
-who could snap my neck as easily as a bird’s-
“-and will inform him of my intent to return to London.”
Unless I can manage to escape without him noticing. 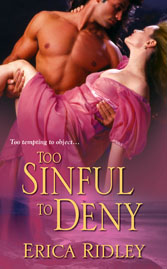 It was likely Miss Susan Stanton had pushed her parents too far this time. Determined to escape her controlling, social climbing mother, Susan’s latest adventure not only created yet another scandal but ended with Susan plunging through the ice and sinking into the dark depths of the Thames to face almost certain drowning. Instead, rescued and revived, Susan finds herself banished from her beloved London to a distant relative’s remote manor house in the middle of what appears to be a nest of smugglers on the coast of Cornwall where her arrival is neither anticipated nor welcomed, her relative has mysteriously disappeared, and there isn’t a single eligible, titled bachelor to be found. If that isn’t bad enough, it soon becomes apparent that her near-drowning has left Susan with an unusual, and unwanted, skill - she can see and converse with dead people – and apparently, they all want to talk to her, especially a young smuggler by the name of Timothy Bothwick who needs her help to solve a mystery and bring the people responsible for his murder to justice.

Evan Bothwick, charming rogue and sometime smuggler is looking for his missing brother and has no time for pesky society misses who want nothing more than to leave Bournemouth but, in a town that small, Miss Stanton is hard to avoid. Before long, they’re working together and the simmering sizzle between them is threatening to burst into flame – a flame neither wants for Evan has no desire to tie himself to one woman and Susan can’t imagine tying herself to anyone who doesn’t live in London. Still…a kiss shared only to convince the townspeople that she wasn’t spying on one of their own (She was.  How else was she to get information when nobody in this town would talk to her?) while lurking behind a building has Evan itching for more even as he dreads the probable outcome.

“I suppose the gentlemanly thing to do would be to offer for you,” he somehow managed to say over the currents swirling in his stomach. The impromptu kiss now seemed a death knell. Marriage. Much as he longed to hold her, to possess her, to pleasure her - he had not envisioned a permanent situation.
But she was already shaking her head.
“Thank you for offering, but you needn’t bother. I’ve plans for my future and they don’t involve being trapped in this godforsaken town. I’d rather spend the rest of my life imprisoned in my parents’ townhouse than another minute on this beach. Er, no offense meant.”

I thoroughly enjoyed this adventurous, humorous and sometimes poignant gothic romance. Susan and Evan are poster children for the attraction of opposites. This spunky (good intentioned) busybody and smooth-talking rake could not be more different yet their attraction grows into a true, deep and abiding love as they each also grow as people.  Add in pirates, ghosts, crooked politicians, quirky townspeople and a nasty villain along with mysteries to be solved and you have another winner from Erica Ridley.

While Susan was introduced, and had a significant role, in Ridley's first book, Too Wicked to Kiss, it's not necessary to have read that book before reading Too Sinful to Deny.  However, I believe reading Too Wicked to Kiss first will give you a more complete understanding of Susan's background and a greater appreciation of the person she becomes over the course of Too Sinful to Deny.