Review - - Taken by the Prince 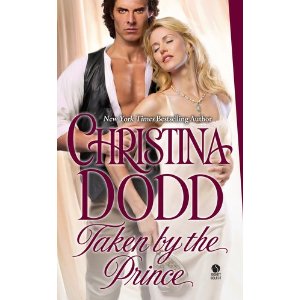 What madness made her experience an affinity to a bastard driven by some unexplained rage to lust?

It was as if she understood him. As if she, Victoria Cardiff, sensible and prosaic, had found the one mate who would allow her to be the woman she truly was…

Being a school friend and confidante of his younger half-sister, Miss Victoria Cardiff had, of course, heard the story about Raul Lawrence being a secret king in exile but, being a practical miss, she had dismissed it for the fairy tale it obviously was. After all, the man is the bastard son of an English lord. True, Grimsborough had adopted him and made him his heir but that hardly made him a king! When she finally meets the arrogant and darkly attractive man at his sister’s birthday party she finds herself drawn to him and, when they share a passionate kiss on a moonlit balcony, she is enchanted, as is he...until he ruins it all by apologizing for the kiss. They part in anger, he to complete his secret mission to Moricadia and she to hone her skills at the Distinguished Academy of Governesses, seemingly never to meet again, but three years later…

Since being sent to live with his cold, cruel father in England at the young age of eleven, everything Saber “Raul” Lawrence has learned has been in pursuit of one goal: to return to Moricadia and free his people from the de Guignards, the murderous usurpers who stole the throne from his family. When he finally earns his freedom at the age of twenty-one, he leaves England behind and returns to the country of his heart to begin his secret campaign to restore the throne of Moricadia to its rightful rulers. Three years later, everything is moving along according to schedule when a governess traveling with an English family arrives in Moricadia and threatens to undermine the entire revolution with a careless slip of the tongue, leaving Saber with only one option: kidnap the woman who had enchanted him on that long-ago night and hold her captive until the throne is recaptured.  And that's when the fun really begins...

Saber is confident in his ability to lead his people as well as his ability to control Victoria but the young girl of his memories has grown into a smart, savvy woman who more than holds her own.  When Saber offers her the job of his mistress, she "gifts" him with a head butt to the face.  When he assigns her the task of teaching his adult relatives manners, she instead begins teaching the children English...and learning Moricadian from them in return.  She challenges Saber at every turn and earns not only his affection but his respect, as well as the respect of his people.  Victoria is not a heroine who waits passively on the sidelines of the revolution.  Two of my favorite scenes in the book are how she handles the unwanted attentions of Saber's cousin (and rival for the crown) and then maneuvers a confrontation between the two men to her desired conclusion.  Victoria is obviously a woman who can stand on her own and I adored her!

Saber, on the other hand, is one of my favorite Dodd heroes:  an arrogant alpha male; confident, sensual and  secure in the knowledge that his way is the right way...until he's knocked to his knees by his heroine.  I love the resilience of the young Saber in the face of his father's cruelty, the adult man's willingness to protect and provide for his people, his determination to free them and his understanding and acceptance of the woman Victoria is meant to be.  But, like many alpha heroes, he's a bit late in understanding just how much his heroine means to him and must execute some very creative and satisfying groveling in order to achieve his happy ending. I liked that too! *g*

Christina Dodd is one of my "go to" authors.  Though I enjoy some of her books more than others, I can always count on her for bold heroes, intrepid heroines, fast-moving plots, sizzling sensuality and wry humor.  Taken by the Prince delivers on all counts.  Add in a fascinating secondary cast (I so hope we'll see more of Saber's sisters in future books!), dastardly villains, a rugged, mountainous landscape and a life or death struggle to save a country and its people and you have a book that I've already read twice and will be re-visiting time and time again. I highly recommend Taken by the Prince.