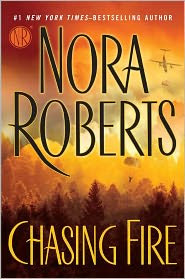 Rowan Tripp is a veteran smoke jumper, those brave individuals who risk their lives to fight wildfires. Part of the unit from Missoula, Montana, known as "Zulies", Rowan has been doing this since she was eighteen years old, following in the footsteps of her father, the legendary Lucas "Iron Man" Tripp. She revels in the danger and excitement of being a smoke jumper, but when her jump partner Jim Brayner dies due to a jump gone horribly wrong, Rowan is plagued by nightmares. But this is a new season, and there are rookies to train. This group is particularly strong, but one stands out: Gulliver Curry, nicknamed Fast Feet for his incredible speed. Gulliver sends out unmistakable signals that he's interested in Rowan, but she makes it a point never to become romantically involved with men she works with. But it may be time to break that rule.

Gulliver Curry has experience fighting fires, but not as a smoke jumper. Making it through rookie training as a Zulie is his goal, and he succeeds with flying colors. He hopes his half as successful with the tall and gorgeous Rowan Tripp. Even though she has an unwritten rule about not getting involved with a fellow Zulie, Gull believes that some rules are made to be bent and even broken. Gull definitely feels the attraction and he knows that Rowan is not immune to it either. The chemistry and heat that's smoldering between them is certain to ignite, and when it does it will burn hotter and longer than any wildfire they've ever battled. In this case, it's better to surrender than fight. But there is an unseen danger lurking in the shadows, someone who has murder and arson on their mind, and Rowan and Gull are caught in the middle of the madness.

Nora Roberts has long been a "go-to" author for me. When I read her books, I escape for a few hours to another place, living and loving with the characters who come to life on the pages. One of things that Ms. Roberts does best is use the setting as a character, and in Chasing Fire it's the fire that becomes a living, breathing entity. I could feel the heat, smell the smoke, and realize the fear of being in the middle of this hell on earth. The smoke jumpers refer to the fire as "the dragon" and it is all to easy to see why.


All she heard was the fire, the muttering glee of it. It crackled over the dry timber, lapped at molten pine resin, chewed through leaves, twigs littering the ground. She dodged a firebrand as she climbed, beat out the spot.

She thought of bodies charred to the bone.

When she crested the ridge she stopped to check her bearings. She could see the red-orange fury, gobbling up fuel. They'd given her a head start, she thought; they'd had no choice. The dragon ran strong and free.


Rowan is a strong, no-nonsense heroine, but of course, she has that vulnerable heart that yearns for love even if she doesn't want to show it. Her loyalty and love for her family and father made me like her even more. And boy, was it fun watching Gull win her over. He is charming as all get out, and I couldn't help but fall in love with him myself. That seems to happen to me quite often with La Nora's heroes. She writes some sexy, irresistible men, and I'm so grateful for it!

Chasing Fire is another keeper to add to my extensive Nora Roberts' collection. Action, suspense, humor, red-hot sex, and heart-melting romance, and so much more make this a book that you won't want to miss.